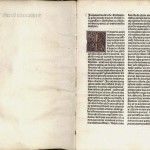 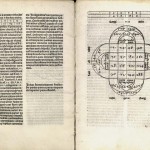 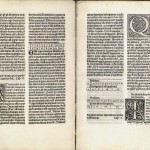 Ancius Manlius Severinuis Boethius, Roman philosopher and statesman, was appointed consul of Rome in 510. A minister under Emperor Theodoric, Boethius was falsely accused of treason, imprisoned, and sentenced to death.  According to tradition, he wrote his great work, The Consolation of Philosophy, while awaiting execution.  His treatise on ancient music was also for many centuries unrivaled as the final authority on Western music. Boethius’ Arithmetica was produced by Erhard Ratdolt as part of his extensive program of astronomical and mathematical publications. The early printed treatise is typical of the classical works used in Western European Renaissance education.