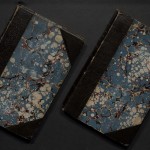 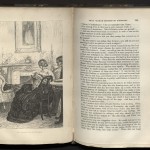 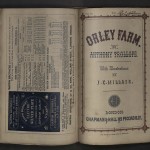 Bound from the monthly issues, with the original wrappers and ads bound in. Many of the wrappers have a contemporary ownership signature. The issues were illustrated with forty engraved plates by the Pre-Raphaelite artist, John Everett Millais (1829-1896). University of Utah copy is bound in late nineteenth-century straight-grain morocco over marbled boards, gilt spines, top edges gilt. 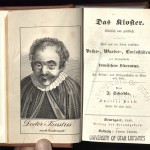 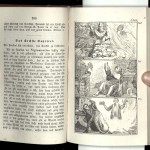 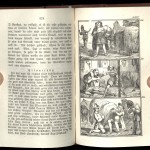 Das Kloster (“The Cloister”) is a collection of magical and occult texts, chapbooks, folklore, superstition and fairy tales from the German Renaissance compiled by Stuttgart antiquarian Johann Scheible. It was published in twelve volumes between 1845 and 1849. Volumes three, five and eleven are devoted to the Faustian legend. Volumes seven, nine and twelve are devoted to topics related to folklore and ethnography written by F. Nork, a pseudonym of Freidrich Korn (1803-1850). Illustrated. 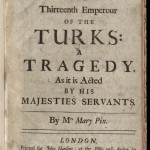 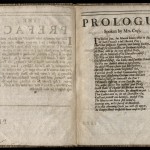 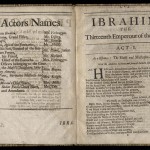 Ibrahim, the first play written by novelist and playwright Mary Pix, was first performed by Christopher Rich’s patent company at Theatre Royal, Drury Lane, to good reviews. It was revived several times well into the eighteenth century. Pix drew on Jean Chardin’s (1643-1713) Travels to Persia, 1686, for her depiction of the Islamic world. She captivated English audiences with the sexual mysteries of the Harem. In the first production, Susanna Verbruggen (ca. 1667-1703) played the chief of the Eunuchs.

Pix wrote at least six other plays and five more anonymous plays are attributed to her.  Her work often put stronger emphasis on female perspective than was usual for the time. The exotic setting for Ibrahim allowed Pix to explore questions of rape, female power, and the dynamics of resistance to authority. It has two especially strong female characters; one ambitious and manipulative, the other doomed by her virtuousness.

Mary Griffith married George Pix, a merchant tailor, in 1689.  She had two sons, George (1689-1690) and William (b. 1691). About six years later, Pix became involved in a plagiarism scandal with George Powell, a rival playwright and theatrical company manager. Pix accused Powell of keeping a manuscript she had sent, reworking and renaming the play as his own. An anonymous writer published a letter attacking Pix for her bad spelling and the audacity to publish her work. In spite of the letter, Pix’s reputation remained stable and she continued to write, but mostly anonymously. It should be noted, however, that authorship was not generally advertised on playbills, nor always given when plays were printed at this time. Exhibition: Down to the Bones

De Humani Corporis Fabrica of Andreas Vesalius (1514-1564) was an exquisite piece of creativity that blended observation; organization of information, format, typography; and illustration into an integrated whole to accurately describe the human body. The intense collaboration between scientist, artist, and printer was unprecedented. Prior to the publication of this book, medical texts were mostly derived from the medieval Arabic medical tradition or from translations of the works of Classical authors, whose texts had been corrupted by translation and re-translation: from Greek into Syriac, Syriac into Arabic, Arabic into Latin. Renaissance Europe embraced the classical works of Hippocrates and the Greco-Roman Galen. Vesalius, however, chose to further his knowledge of human anatomy by studying human cadavers. From these studies, Vesalius formed his position that the validity of any hypothesis rested solely upon facts established by observational methodology. His work marked the beginnings of modern science. 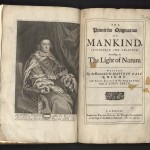 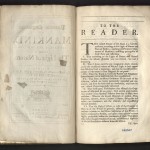 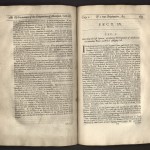 Primitive Origination of Mankind Considered and Examined According to the Light of Nature…
Sir Matthew Hale (1609-1676)
London: Printed for William Godbid, for William Shrowsbery at the Sign of the Bible in Duke-Lane, 1677
First edition

Published after Sir Hale’s death, this curious treatise attempts to prove that the world must have had a beginning else mankind could never have existed from eternity.

Dr. Ronald Rubin has donated a set of Lewis Carrol’s Alice’s Adventures in Wonderland and Through the Looking Glass and What Alice Found There.

Dr. Rubin, with his frequent and diverse gifts to the Rare Books Division, helps add to the breadth and depth of our collections. Thank you, Dr. Rubin, for helping the rare book collections grow.

This edition was designed by George Salter using John Tenniel’s illustrations from the first edition, colored by Fritz Kredel. Dalziel Brothers were the wood-engravers. Type face is Monotype Scotch. Two matched volumes issued in one slipcase. 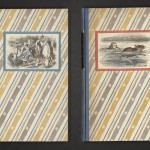 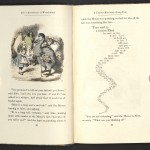 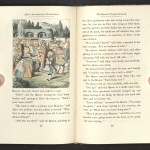