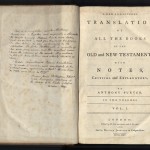 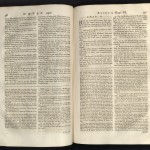 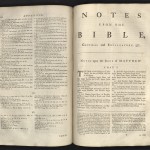 A New and Literal Translation of all the Books…
London: Printed by W. Richardson and S. Clark, and sold by William Johnston in Ludgate-Street, MDCCLXIV (1764)
First edition

This is the first and only edition of the Bible of the Quakers. Samuel Fothergill (1715-1772) was a prominent Quaker of his generation. He spent two years, 1754-1756, in the American colonies, traveling almost 9,000 miles to attend Friends’ meetings in order to help strengthen their Quaker principles. Earlier, he had become interested in Anthony Purver’s translation of the Bible and encouraged its publication in parts in 1746.

Purver (1702-1777) was a Hampshire-born apprentice shoemaker-turned-Quaker-preacher. He learned Hebrew, Aramaic, Syriac, Greek, and Latin, and read massive amounts of Biblical criticism, including rabbinic commentary, and studied early English translations of the Bible. For his translation of the Bible, Purver added critical and explanatory notes.

Purver contracted with Bristol printer Felix Farley to undertake the printing project. Purver’s enthusiasm waned and his work ground to a halt. Fothergill urged Purver to persevere, and when Purver completed the work in 1763, he paid Purver for the copyright and published the edition at his own expense.

The University of Utah copy is inscribed by Samuel Fothergill (1715-1772) to his niece on the front free endpaper of Volume I: “Doctor Fothergill/To his Niece S T/Now S. Hird.” An ink signature of Fothergill’s niece, Sarah Hird, is on the front free endpaper of Volume II. Book plate of Joseph Crosfield on the front pastedown of each volume. Joseph Crosfield was the brother of George Crosfield (1785-1847), who compiled Memoirs of the Life and Gospel Labours of Samuel Fothergill (1843). A note in a 19th century hand, appears on the verso of the leaf opposite the title-page in volume I. Our copy bound in contemporary speckled calf.

Rare Books at the U make History Come Alive

“The real value of the collection cannot be measured in numbers…,” Poulton said. “…It is not about the money, but absolutely about the emotional connection that can be made with the past and with the books.” 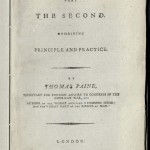 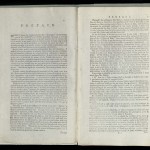 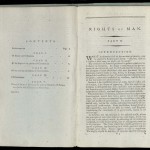 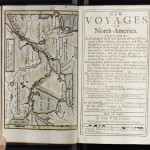 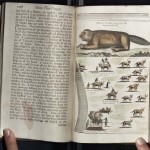 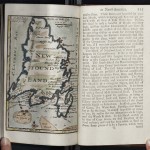 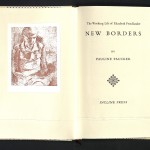 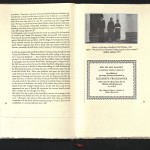 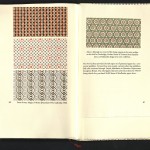