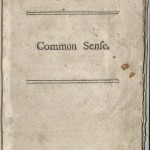 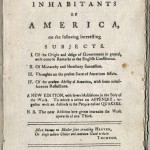 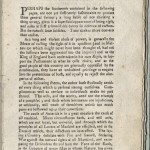 Thomas Paine called for the separation of the colonies from the mother country in his pamphlet, Common Sense.  Paine’s writings paved the way for the American colonists’ final break with Great Britain.

Common Sense, a persuasive argument for independence, was a best seller immediately upon publication. First printed in Philadelphia by Robert Bell on January 9, 1776, in an edition of one thousand copies, it was read by everyone in the Continental Congress and George Washington, who commented on the effect it had on his troops. It was read by nearly everyone in the colonies who was literate, and read aloud to nearly everyone who was not.

Paine had planned to give his share of the profits to the cause of independence, but when Bell told him there were no profits, Paine dismissed Bell and hired Bradford to publish a new, enlarged edition. Bell published an unauthorized second printing on January 27, and Bradford’s enlarged edition was published on or around February 14. The pamphlet quickly sold 150,000 copies.

Paine refused to copyright the work and gave permission to all to reprint it. The earliest printings outside of Philadelphia used the text of Bell’s first printing. Later printings used the text of Bradford’s February printing. Twenty-five editions were published in thirteen cities in the year 1776, reaching nearly half a million copies printed in that year alone. At that time, the colonial population was about three million, including slaves, women, and children. It was this pamphlet that moved mass public opinion toward the cause of the revolution.