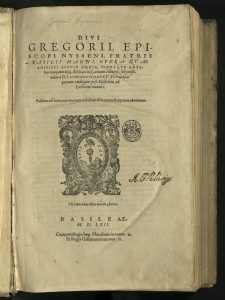 “…by an ever greater and greater desire, the soul keeps rising constantly to another that lies ahead, and thus it makes its way through ever higher regions towards the Transcendent.” — Saint Gregory of Nyssa

This is the most complete Latin translation of the works of Saint Gregory, Bishop of Nyssa, to its time, and the first translated by philologist Laurentius Sifanus (ca. 1510-1579), who taught at university in Ingolstadt. The translation has been found by modern scholars to be faithful to manuscript copies of the text. Printed marginal references to passages from the Hebrew Bible and the New Testament are throughout the book.

Gregory of Nyssa (ca. 335-ca. 395) was born in Cappadocia, modern-day Turkey. An erudite theologian, he made significant contributions to the doctrine of the Trinity and the Nicene Creed. He was strongly influenced by Origen (ca. 185-254) and the Jewish philosopher Philo of Alexandra (ca. 20BCE – ca. 54CE). He and his older brother, Saint Basil, are credited with defining Christian orthodoxy in the Eastern Roman Empire just as Augustine (354-430) was to do later for the Western Roman Empire.

It is likely that Gregory was taught by his older brother Basil, who attended school in Constantinople and Athens. Gregory drew inspiration from pagan Greek philosophy as well as Jewish tradition. He was well-acquainted with the works of Plato (427-347 BCE) and Aristotle (384-322 BCE).

Basil established a monastery in Pontus, which he directed for five years. He wrote a monastic rule still practiced by monks of the Eastern Orthodox Church. Basil was the leader in the fight against Arianism (which denied the divinity of Christ).

Both Basil and Gregory were very close to their sister, Macrina, who also attained sainthood in the Eastern Orthodox Church. After Basil and Macrina died, Gregory continued Basil’s fight against Arianism. He participated in the Council of Antioch against those who refused to recognize the perpetual virginity of the Mother of God. He visited the churches of Palestine, where he asserted the Orthodox teaching about the Most Holy Theotokos, and visited Jerusalem. In 383, he participated in a Council at Constantinople, where he preached a sermon on the divinity of the Son and the Holy Spirit. He returned to Constantinople in an official capacity twice more before his death, sometime around 395.

Printer-publisher Nicolaus Episcopius the Younger of Basel used a printer’s device that featured a crane, the symbol of watchfulness and discernment. The crane holds a stone in one of its claws so as not to fall asleep. A hand extending from a cloud grasps a bishop’s crozier upon which the crane is perched. Written across the top of the staff is EPISCOP, a shortened form for the Latin word for bishop, and a play on the name of the printer, a latinized form of the name Bischoff. 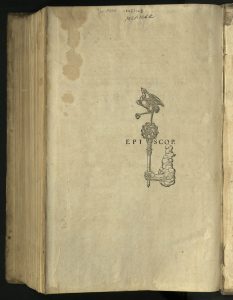 Nicolaus Episcopius the Elder married Justina Froben, daughter of the well-known printer Johann Froben. Episcopius the Elder printed in partnership with Hieronymus Froben, son of Johann. Nicolaus the Younger learned to print in his father’s shop. Between 1553 and 1565 he concentrated on printing editions of the classics, philosophy and history, including the works of Philo, Livy and Sir Thomas More. His interests were very much in line of other important printers of the time. 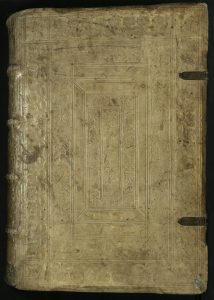