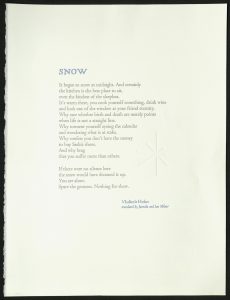 “It’s warm there, you cook yourself something, drink wine
and look out of the window at your friend eternity.”
– Vladimir Holan, Snow 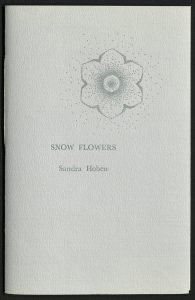 Edition of 75; University of Utah’s copy is number 50. 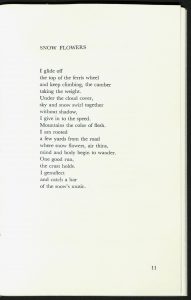 “Under the cloud cover,
sky and snow swirl together
without shadow,
I give into the speed.”
– Sandra Hoben, Snow Flowers 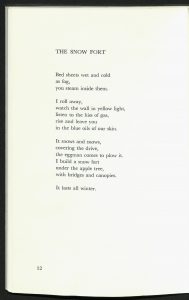 “I build a snow fort
under the apple tree,
with bridges and canopies.”
– Sandra Hoben, The Snow Fort 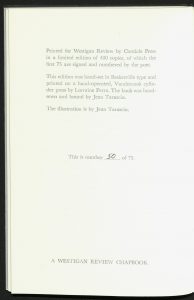 Snow has finally fallen at the University of Utah, kicking off the ’16-17 winter season. With temperatures in the teens and twenties, we need something to warm our hearts. Which is why we went in search of these amazing poems. So grab a blanket and let these poems, beautifully printed by Canticle Press, warm you up while you look out the window as the snow falls.

For more information about Vladimir Holan, visit this page:

Sandra Hoben’s poems have appeared in magazines and anthologies, including Alaska Quarterly Review, Antioch Review, Estero, Field, How Much Earth: The Fresno Poets, Ironwood, Partisan Review, Quarterly West, Tangled Vines, Three Rivers Poetry Journal, and Western Humanities Review, and in a chapbook, Snow Flowers from Westigan Press. She has taught at World College West, University of Utah, and in California and Utah Poets-in-the-Schools programs. Born in Waterbury, Connecticut, she inherited her wanderlust from her great-grandmother, Mary Murphy, who had traveled from Dublin to New England, but who was never able to make it all the way to Los Angeles.

Lorraine Ferra was born and raised in Vallejo, California, a seaport on the east side of the San Francisco Bay. At the age of nineteen, Lorraine’s mother died of cancer. This loss left her directionless, overturning her desire to become a newspaper columnist and leading her to the decision to enter the convent. She was a nun for seven years, majoring in theology and education and eventually teaching in Catholic schools. After leaving the convent, she was offered a position as curriculum director in the Salt Lake City Diocese. While living in Salt Lake, she pursued seminars in modern and contemporary poetry and creative writing under the directorship of the poet, Robert Mezey, at the University of Utah. She was accepted to the Utah Arts Council’s Poets-in-the-Schools program and was awarded a Utah Arts Council Award in Literature.