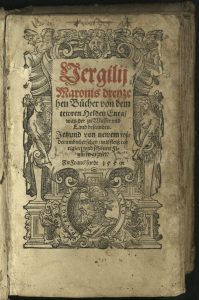 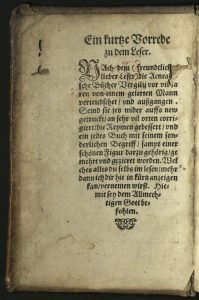 “A Brief Preface to the Reader. Please note (dear friendly reader) that Virgil’s books of the Aeneid were translated into German many years ago by an educated man and were published. Here they are again, newly printed, corrected in many places, the printing improved, and every book having its own beautiful illustration attached to it. You can see this for yourself while reading, more than I can quickly show or tell you. Herewith are Almighty God’s commands obeyed.” 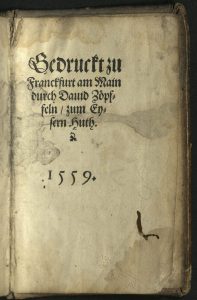 We have many important historical contributions to thank the humanists for. This delightful version of Virgil’s Aeneid in German is one of them. Printed in 1559 by David Zöpffeln in Frankfurt using Thomas Murner’s 1515 translation, this palm-size treasure is a combination of several exciting 16th century developments. Holding it in your hand is like having a piece of the Renaissance all to yourself. Sometimes I feel Humanism gets too much hype; that putting the humanist movement on a pedestal risks overlooking a thousand years of important history. Yet if there is one way to convince me how fantastic the humanists were it would be to hand me a copy of Vergilii Maronis Dreyzehen Bücher von dem tewren Helden Enea. 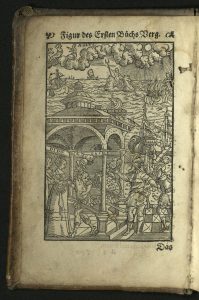 What makes this book special? First, it is Virgil’s Aeneid. Second, it is Thomas Murner’s German translation. Third, it represents a culmination of Renaissance philosophical thinking that occurred in Europe during the 16th century. Let’s break this down.

Who was Virgil? Publius Vergilius Maro (70 – 19 BCE) was an ancient Roman poet of the Augustan period and is traditionally ranked as one of Rome’s greatest poets. He wrote three of the most famous poems in Latin literature: the Eclogues (or Bucolics), the Georgics, and the epic Aeneid. The Aeneid has been considered the national epic of ancient Rome since the time of its composition and is considered Virgil’s finest work and one of the most important poems in the history of western literature. Virgil worked on the Aeneid during the last eleven years of his life, commissioned, according to Sextus Propertius (a Latin elegiac poet of the Augustan age), by Augustus (born Gaius Octavius, great nephew of Julius Caesar, founder of the Roman Principate and considered the first Roman emperor). Modeled after Homer’s Iliad and Odyssey, the Aeneid follows the Trojan refugee Aeneas as he struggles to fulfill his destiny and reach Italy –where his descendants Romulus and Remus were to found the city of Rome. Virgil’s work has had wide and deep influence in Western literature, most notably Dante’s Divine Comedy, in which Virgil appears as Dante’s guide through Hell and Purgatory. 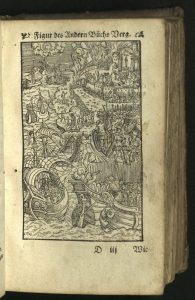 Who was Thomas Murner? He was a German satirist, poet, and translator who lived from 1475 until 1536 or 1537 (accounts differ). He was educated, a member of the Franciscan Order, and a humanist. Never turning to secularism, Murner directed his satires against the corruption of the times and the Reformation (particularly Martin Luther). His most powerful and virulent satire was Von dem grossen Lutherischen Narren wie ihn Doctor Murner beschworen hat (On the Great Lutheran Fool, 1522). In 1523 Henry VIII invited Murner to England, where his writings caught the attention of the famous humanist Thomas More. John Headley (Professor Emeritus, The University of North Carolina at Chapel Hill, Ph.D. Yale University, 1960) postulates that it was Murner who first made More aware of Martin Luther’s radical ecclesiology (or theology as applied to the nature and structure of the Christian Church). 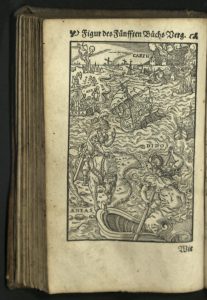 Okay, so what’s Humanism all about anyways? Humanism is an outlook or system of thought attaching prime importance to human rather than divine or supernatural matters. Humanist beliefs stress the potential value and goodness of human beings, emphasize common human needs, and seek solely rational ways of solving human problems. In the Renaissance perspective, it was a cultural movement that turned away from medieval scholasticism and revived interest in ancient Greek and Roman thought. Humanism is a philosophical and ethical stance that emphasizes the value and agency of human beings, individually and collectively, and generally prefers critical thinking and evidence (rationalism and empiricism) over acceptance of dogma or superstition. 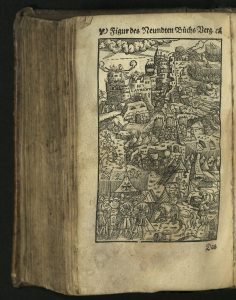 What’s the big deal with Humanism and why is it so important? Humanism began as a revival of the study of ancient Greek and Roman texts, yet the humanists did not see themselves as being in conflict with Christianity. Some were secular leaders, but many were ordained priests. The humanists’ close study of Latin and Greek literary texts enabled them to discern important historical differences in the texts during various time periods. This was greatly aided by the influx and increased availability of many texts coming into Western Europe after the fall of the Byzantine Empire in 1453. Humanist scholars increasingly turned to the study of Neoplatonism and Hermeticism, hoping to bridge the differences between the Greek and Roman Churches, and even between Christianity itself and the non-Christian world. The refugees from Byzantium brought with them Greek manuscripts, not only of Plato and Aristotle, but also of the early copies of the Christian Gospels, previously unavailable in the Latin West. 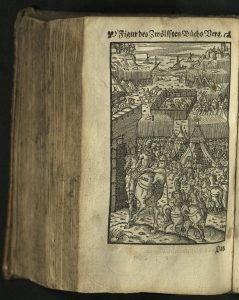 When the new invention of printing made these texts widely available, the Dutch humanist Erasmus (who had studied Greek at the Venetian printing house of Aldus Manutius) began a philological analysis of the Gospels in the spirit of Lorenzo Valla (1407-1457), Italian humanist, rhetorician, educator, and Catholic priest, comparing the Greek originals to their Latin translations with a view to correcting errors and discrepancies in the latter. Erasmus, along with the French humanist Jacques Lefevre d’Etaples (c. 1455–1536), began issuing new translations of important historical texts. Italian and French humanism concentrated on scholarship and philology.

That is why this 1559 edition of Vergilii Maronis Dreyzehen Bücher von dem tewren Helden Enea is so fantastic – its connection to something bigger than itself. That is what makes all of us humans so special, as the humanists realized centuries ago. We are all individually and collectively amazing, like books, because of our ability to connect to and become part of something bigger than just ourselves – yet without fearing the loss of our personalities. This palm-size copy of Virgil’s Aeneid in German has some great personality, but it is also part of something big and wonderful. 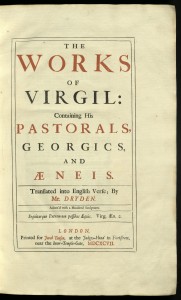 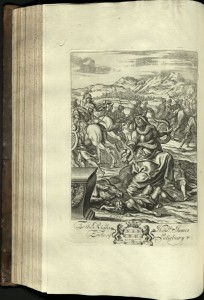 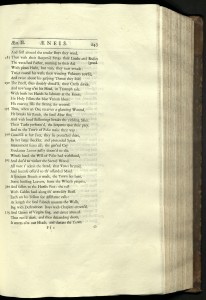