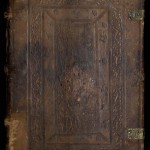 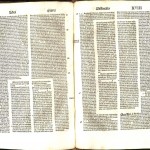 Petrus Lombardus (Peter Lombard) was a Medieval French theologian. He taught at the Cathedral school of Notre Dame and towards the end of his life became Bishop of Rome. Written between 1148 and 1151, Sententiarum is a collection of teachings of the Church Fathers. In it Lombardus recognized the role of reason in theology. Until the sixteenth century it was the official textbook of theology in many universities. Hundreds of scholars wrote commentaries on it, among them Thomas Aquinas, Albert Magnus, and Bonaventura. Despite its great influence, the work itself is unoriginal, but it was among the very first attempts to present Christian theology in a systematized form. This edition was printed by Anton Koberger, a significant early printer. Koberger published more than two hundred editions. Because Sententiarum was used as a textbook, it has no decorative initials or other ornaments. This folio is bound in contemporary calf over oak boards, with blind-stamped panels on the sides. The binding is decorated with a roll depicting a hunting scene. The lining papers consist of proof sheets from Boethius’s De Institutione Arithmetica, printed at Augsburg in 1486. These sheets consist of four pages of the book and include diagrams and tables. The proofs are printed on the back of proofs of another and unidentified book. A manuscript note on the title page suggests that it at once belonged to the monastic library of St. Elizabeth at Brescia.