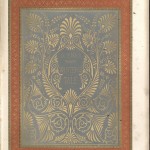 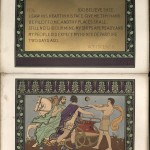 Shakespeare, Scenes from the Winter’s Tale, 1866, Act I Scene II 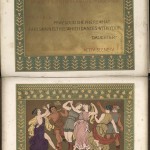 This is the first edition of this pictorial retelling of Shakespeare’s stylized play set in ancient Greece. Both text and illustration were designed as a single entity by Owen Jones, united by the use of one color scheme and type of ornament on each two-page spread. The decorative motifs used are derived from historical styles illustrated in Jones’ The Grammar of Ornament. This book is illustrated with forty-eight chromolithographs, illuminated by Owen Jones over figures by Henry Warren. Jones and Warren began their collaboration in 1841 with Ancient Spanish Ballads (1841). The books they worked on together provide an integration of ornament, drawn text, and illustrated figure unique in the history of printing.

Text and facing illustrations are set in broad decorative borders. Bound in publisher’s brown cloth. Front cover is blocked in gold, with elaborate borders in red and purple and central gilt illustration of a flowering plant; the same decoration is repeated in blind on the back cover. Title is gilt on spine, with added decoration. All edges gilt.