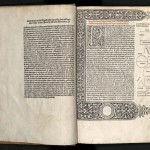 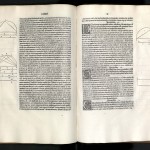 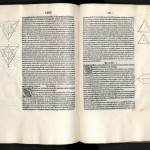 This is the editio princeps, or first printed edition, of Euclid’s Elements of Geometry, the oldest mathematical textbook still in common use today. The Greek mathematician Euclid compiled the work around 300 BC. Its success can be attributed to its simple structure where each theorum follows logically from its predecessor.

In 1482, Erhardt Ratdolt, famous for his beautifully produced scientific books, printed eight works – Euclid’s Elements among them. Ratdolt’s fame largely rests upon this edition of Elements. It is the first printed book to contain geometrical figures. An elegant three-sided woodblock and a white-vine style woodcut initial, several hundred small ornamental capitals, and more than four hundred and twenty carefully designed and perfectly printed marginal diagrams, confirm its standing as a landmark publication.

The page layout, particularly the first page, is an outstanding example of Ratdolt’s consideration of the overall look and readability of his work. Note the closeness of the type to the initial and the close set of the text page. For the text, Ratdolt used a type called “rotunda” or “round-text.” The Italian writing-masters called this littera moderna.

Ratdolt’s book was based on the standard Euclid of the later Middle ages: Abelard of Bath’s twelfth-century translation from the Arabic, revised in the following century by Campanus of Novara (d. 1296). In his dedication to this edition, Ratdolt suggested that the scarcity of printed mathematical works was due to the problems involved in printing the geometrical diagrams.  He then happily announced that he had discovered a method of printing them as easily as the text. He did not elaborate upon this method, but it most likely involved the use of type-metal rule arrangements that could be printed along with the text.