Headquarters of the Militia,

Sir: Since the order of this morning to you, directing you to cause four hundred mounted men to be raised within your division, I have received by Amos Reese, Esq., of Ray county, and Wiley C. Williams, Esq., one of my aids [sic], information of the most appalling character, which entirely changes the face of things, and places the Mormons in the attitude of an open and avowed defiance of the laws, and of having made war upon the people of this state. Your orders are, therefore, to hasten your operation with all possible speed. The Mormons must be treated as enemies, and must be exterminated or driven from the state if necessary for the public peace – their outrages are beyond all description. If you can increase your force, you are authorized to do so to any extent you may consider necessary. I have just issued orders to Maj. Gen. Willock, of Marion county, to raise five hundred men, and to march them to the northern part of Daviess, and there unite with Gen. Doniphan, of Clay, who has been ordered with five hundred men to proceed to the same point for the purpose of intercepting the retreat of the Mormons to the north. They have been directed to communicate with you by express, you can also communicate with them if you find it necessary. Instead therefore of proceeding as at first directed to reinstate the citizens of Daviess in their homes, you will proceed immediately to Richmond and then operate against the Mormons. Brig. Gen. Parks of Ray, has been ordered to have four hundred of his brigade in readiness to join you at Richmond. The whole force will be placed under your command.

I am very respectfully,

When, as a young man in his teens, Joseph Smith, Jr. announced he had received a vision in which he met God the Father and Jesus Christ, it did not sit well with many of those who heard the news. From that time forward Smith experienced strong opposition to his religious beliefs and endeavors. He persisted, and at the 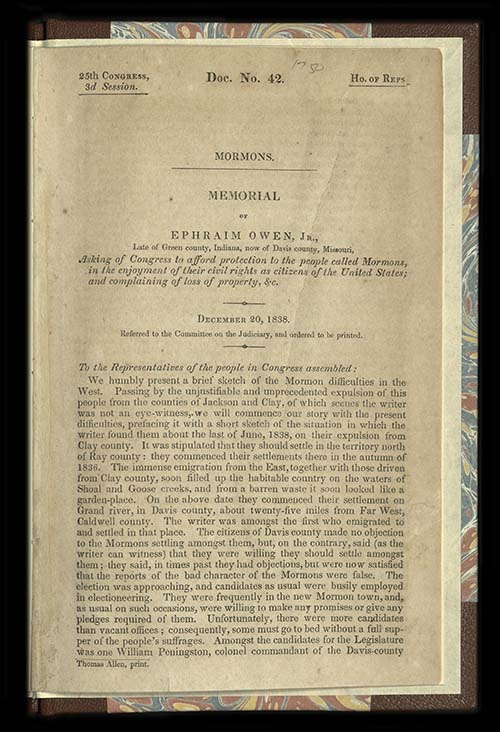 age of 24 (in 1830) he founded the Church of Jesus Christ of Latter-day Saints. From its humble origins in western New York this church grew, never quite able to escape opposition and its consequential persecution due to the nature of the Church’s origin and its differences in doctrine from other Christian denominations.

Most people in Utah are familiar with the pioneer heritage members of the Church of Jesus Christ of Latter-day Saints (often referred to as Mormons or LDS) share and their propensity for celebration of Pioneer Day (July 24th) because of it. A celebration of the day Brigham Young (Joseph Smith, Jr.’s successor and second president of the LDS church) reached the Salt Lake valley via horse-drawn wagon in 1847, Pioneer Day is a reminder to those belonging to the LDS church of the rewards which result from enduring persecution through faith. Emerging from Emigration Canyon and stopping on top of a hill, the enfeebled Brigham Young, sick with Rocky Mountain Spotted Fever, viewed the valley from the back of the wagon he was riding in and proclaimed, “It is enough. It is the right place. Drive on.” Young’s statement referred to a vision the leader had previously experienced about the place where the Latter-day Saints would settle and “make 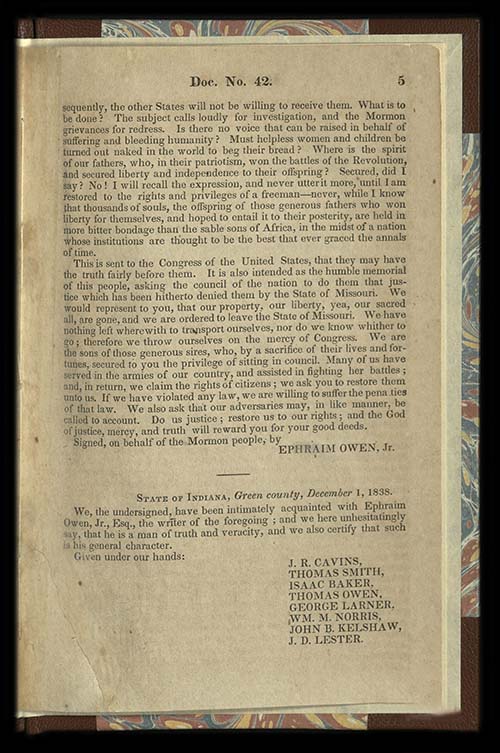 the desert blossom like a rose,” and where they would build their State of Deseret. As the wagon train descended into the valley the words “this is the place” spread throughout it, the joyous hope rising that, after almost two decades of conflict with neighbors wherever they went, they would finally find a reprieve from religious intolerance – the original American dream, one might argue.

In 1831, amidst rising opposition and persecution in New York, Joseph Smith and his followers relocated to Kirtland, Ohio. Soon thereafter, some having gone even farther west to proselytize (although unsuccessfully) amongst Native American Indian tribes, a group of Smith’s followers established an outpost in Jackson County, Missouri. Smith planned to move the Church’s headquarters there, but before he could other Missouri settlers (not of the LDS faith) expelled the Mormons from the county. The Missouri Mormons relocated to the north in Davies and 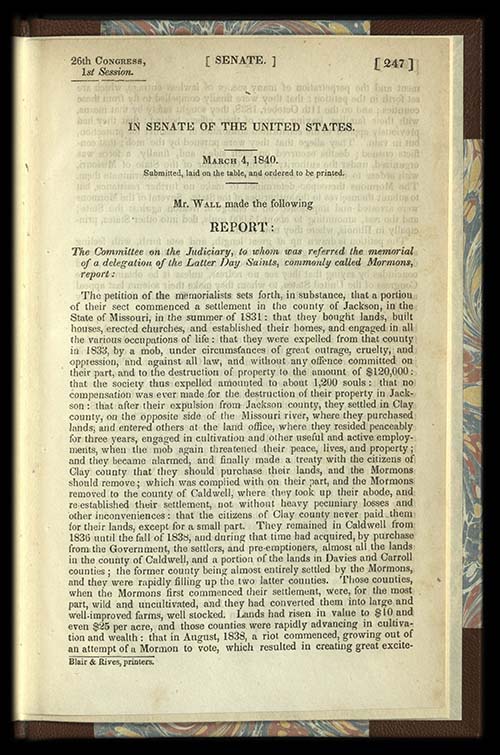 Caldwell Counties and the Kirtland Mormons enjoyed some prosperity, until in 1838 when a financial scandal involving the failure of the Kirtland Safety Society led to the relocation of a large number of the Mormons living in Kirtland to Far West, Missouri. This increase in Mormon population led to additional tension, developing into a series of violent conflicts with their neighbors (sometimes called the 1838 Mormon War). Believing the Mormons to be in open rebellion, Governor Lilburn W. Boggs (sixth Governor of Missouri from 1836 to 1840) issued Missouri Executive Order Number 44, commonly called the “Extermination Order” because in it he wrote, “The Mormons must be treated as enemies, and must be exterminated or driven from the state if necessary for the public peace…” The Missouri militia followed Governor Boggs’ order, and the Mormons were brutally expelled from the state, losing the property they had legally purchased without any recompense.

Having been driven from Missouri, the Mormons relocated to Illinois, where they converted swamp land along the banks of the Mississippi River (which no one else wanted at the time) into a thriving town. They named it Nauvoo. With a strong militia (the Nauvoo Legion, commanded by Joseph Smith) and the fastest growing population in the state due to Mormon proselytization in Europe, done primarily in England at the time, Nauvoo became a 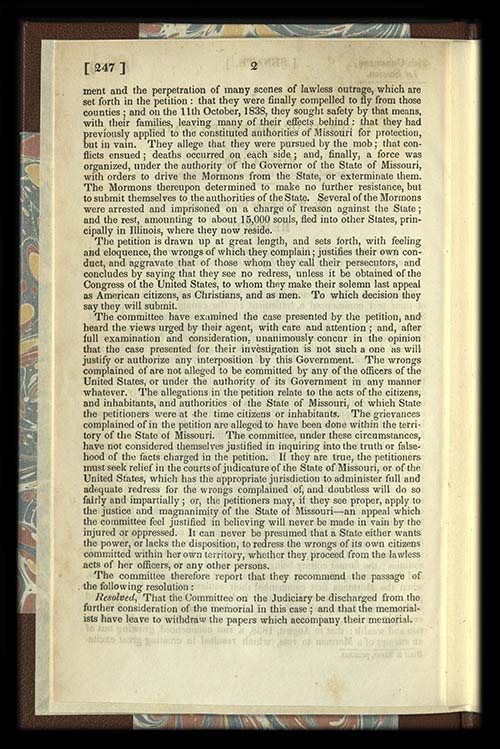 major political concern for those in the state not belonging to the LDS faith. Once again conflict arose. In June of 1844, Joseph and his brother Hyrum, along with a few other LDS leaders, were held for treason in the jail at Carthage, Illinois. On June 27th a group of armed men stormed the jail and murdered Joseph and Hyrum Smith. For the next two years a succession struggle occurred within the LDS membership while tension continued to build between the Mormons and their neighbors. After a more negotiated settlement than had occurred in Missouri took place, Brigham Young led (over a frozen Mississippi River) those who would follow him west, first to Winter Quarters, Nebraska and then to the Great Salt Lake valley.

Redress for the events that occurred in Missouri in 1838 was not made until 1976 when Missouri Governor Christopher S. “Kit” Bond rescinded the 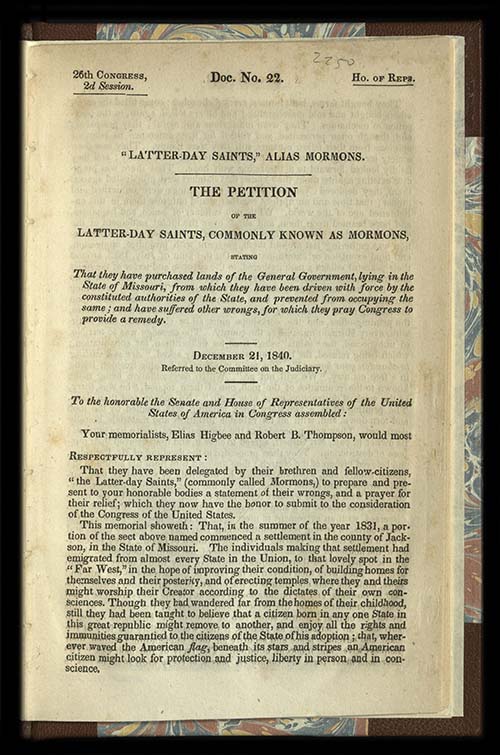 “Extermination Order” and offered an official apology on behalf of the state of Missouri. Speaking at an event in 2010 he said, “”We cannot change history, but we certainly ought to be able to learn from it and where possible acknowledge past mistakes. That was what motivated me to rescind the extermination order in 1976.” While the recension of the law that made it legal to kill Mormons in Missouri until 1976 was undoubtedly a move in the right direction, and the sentiment that learning from past mistakes is a good one, it is also good that there is a day to contemplate the events that led to the building of a strength of character encompassing a group of people who never gave up on the original American dream. Perhaps knowing that they had finally arrived at a place where they could follow it was all the redress they really needed. It must have felt amazing to be in that dusty wagon train descending into the Great Salt Lake valley on July 24, 1847 and hearing the words, “this is the place.” 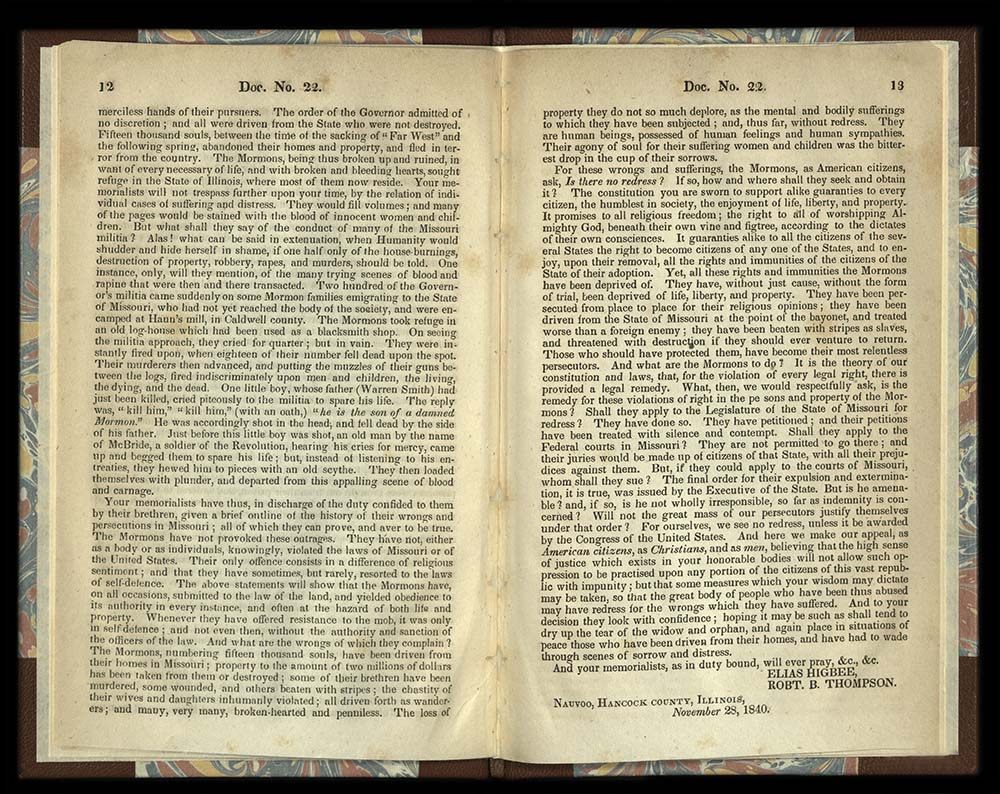