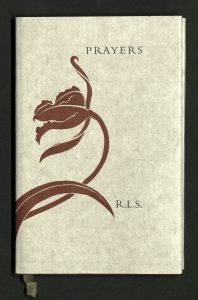 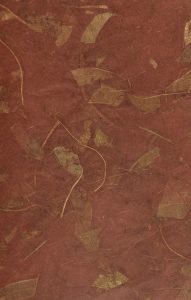 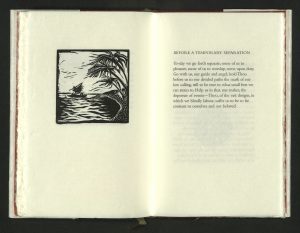 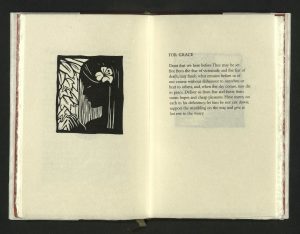 A group of twenty poems inspired by a series of bone and skull drawings by Ruth Fine, eighteen of which are included in this edition. The typeface on forty french-folded pages is 10 point Gill Sans Light printed on Barcham Green Royal Watercolour society paper. Bound in a woven non-adhesive structure on MacGregor-Vinzani calendered ivory abaca paper. Housed in two slipcases; one of Barcham Green’s Renaissance IV made from old British Mailbags; the other is drum vellum. Both slipcases are constructed without glue. The entire structure designed and executed by Claire Van Vliet. Edition of one hundred and fifty copies, numbered and signed by the author, illustrator, and printer. University of Utah copy is no. 24.