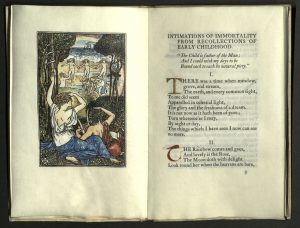 “Then sing, ye Birds, sing, sing a joyous song!
And let the young Lambs bound
As to the tabor’s sound!
We in thought will join your throng,
Ye that pipe and ye that play,
Ye that through your hearts to-day
Feel the gladness of the May!

In 1886, C.R. Ashbee established the Guild of Handicraft at Essex House London. Around the same time, Ashbee created the Essex House Press. The Essex House Press published its first book in 1898. The work of the press was very much a part of the Arts and Crafts Movement. Ashbee continually linked the aims of the press with those of John Ruskin and William Morris and described the object of the movement as “making useful things…making them well and…making them beautiful.”

The critics, however, were not so sure about the work of Essex House Press, calling it “articraftiness.” Later booklovers came to admire much of its work. Some of the presses and some of the workmen for Essex House Press came from the Kelmscott Press after its demise in 1897 following the death of William Morris.

Ashbee designed his own typeface called “Endeavor” for the press. In 1902, the press moved to Glouscestershire. The Essex House Press closed in 1910, having produced more than seventy titles.

Frontispiece by Walter Crane (1845-1915), painter and designer, known especially for his illustrations for children’s books. As an apprentice wood-engraver, he studied the work of Dante Gabriel Rossetti. He associated himself with the Pre-Raphaelites and the English Arts and Crafts Movement, working with William Morris and the Kelmscott Press.

Printed on vellum. Initials hand calligraphed, some with gilt. Edition of 150 copies. University of Utah copy is no. 138. 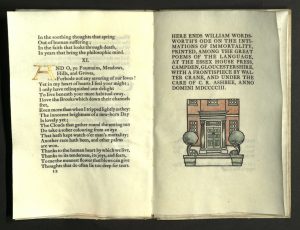