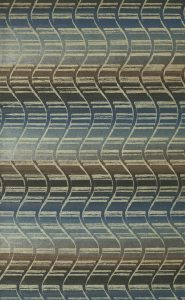 “…do not grieve;
She cannot fade, though thou has not thy bliss,
For ever wilt thou love, and she be fair!”
— John Keats from Ode on a Grecian Urn

Kathleen Thompson of Michael R. Thompson Rare Books worked for several Los Angeles antiquarian booksellers, including Universal Books, Royer Art Books, and Zeitlin & Ver Brugge, before entering into a partnership with her husband, Michael Thompson, and Carol Sandberg in 1985. Hers was often the first face one encountered when visiting their shops on Melrose, Fairfax, and Third. We remember Kathleen for her warmth, sense of humor, thoughtfulness, and intelligence.

I had the pleasure of many conversations with Kathleen over the phone and by email. I will miss her soft Mississippi meter, which, thank goodness, she never did lose, even though she swore she had. We wrote to each other about cousins, music, poets and poems. Here are a few of her favorites. 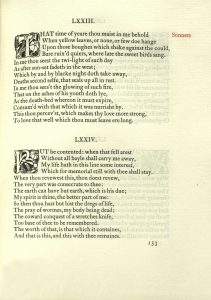 Printed in black and red. Illustrated with floriated initials and one full-page drawing. Bound in vellum with ties. Edition of four hundred and fifty copies. Rare Books copy is no. 274. 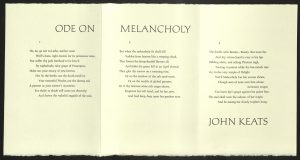 And this from Walter de la Mare:

Very old are the woods;
And the buds that break
Out of the brier’s boughs,
When March winds wake,
So old with their beauty are–
Oh, no man knows
Through what wild centuries
Roves back the rose.
Very old are the brooks;
And the rills that rise
Where snow sleeps cold beneath
The azure skies
Sing such a history
Of come and gone,
Their every drop is as wise
As Solomon.

Very old are we men;
Our dreams are tales
Told in dim Eden
By Eve’s nightingales;
We wake and whisper awhile,
But, the day gone by,
Silence and sleep like fields
Of amaranth lie. 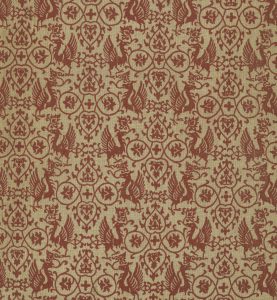 And this from James Agee:

(We are talking now of summer evenings in Knoxville Tennessee in that time that I lived there so successfully disguised to myself as a child.)

…It has become that time of evening when people sit on their porches, rocking gently and talking gently and watching the street and the standing up into their sphere of possession of the trees, of birds’ hung havens, hangars. People go by; things go by. A horse, drawing a buggy, breaking his hollow iron music on the asphalt; a loud auto; a quiet auto; people in pairs, not in a hurry, scuffling, switching their weight of aestival body, talking casually, the taste hovering over them of vanilla, strawberry, pasteboard and starched milk, the image upon them of lovers and horsemen, squared with clowns in hueless amber.

A streetcar raising its iron moan; stopping, belling and starting; stertorous; rousing and raising again its iron increasing moan and swimming its gold windows and straw seats on past and past and past, the bleak spark crackling and cursing above it like a small malignant spirit set to dog its tracks; the iron whine rises on rising speed; still risen, faints; halts; the faint stinging bell; rises again, still fainter, fainting, lifting, lifts, faints foregone: forgotten. Now is the night one blue dew.

It is peculiar mercy none can find
In this lost time where only losers dwell
Who lose the most, the ones who left behind
Wisdom and love and never knew them well
Or those who know too well and as they stay
Inherit silence and the vacant day.
— Luise Putcamp jr.

And I had the honor of being called by Kathleen “a kindred spirit, too.”
— Luise Poulton 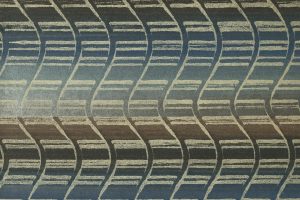 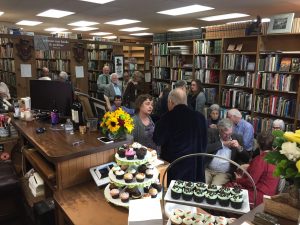