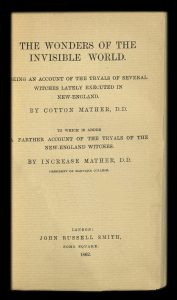 “It has been a most usual thing for the bewitched Persons, at the same time the Spectres representing the Witches, troubled them, to be visited with Apparitions of Ghosts, pretending to have been Murdered by the Witches then represented. And sometimes the Confessions of the Witches afterwards acknowledged those very Murders, which these Apparitions charged upon them; altho’ they had never heard what Informations had been given by the Sufferers.”

Title: The Wonders of the Invisible World, being an account of the tryals of several witches lately executed in New-England 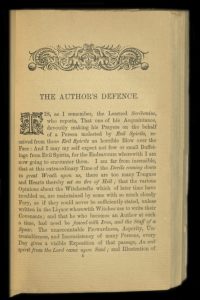 In the late seventeenth century a battle waged across New England. No, it wasn’t the French and Indian War. That one wouldn’t occur for another half century. This was a battle which became manifest in church sermons and in the court room. It wasn’t fought for land. Rather, souls were at stake. Demons were on the rampage, deploying witches in their evil attacks on righteous, Christian New Englanders. The Devil had mobilized and his captains, the demons, gave marching orders to these witches, who did their best to cause the righteous to suffer. Or so some claimed.

One such individual was Cotton Mather, a socially and politically influential New England Puritan minister, prolific author and pamphleteer. Mather was a graduate of Harvard College and participated in the scientific development of hybridization and disease prevention through inoculation, 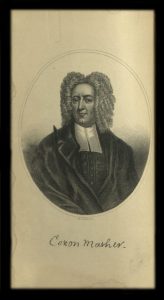 Mather published The Wonders of the Invisible World in 1693, as a defense for the part he played during the trials. In this work he presents himself as an objective historian, drawing on court documents to offer a record of the events. Through this work the reader can easily see that 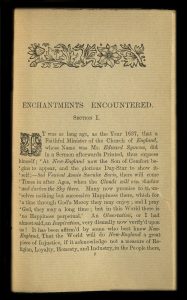 Mather believed that witchcraft existed and was the product of evil magical power granted by the devil to those who swore an oath to him. Mather believed witches were the devil’s tools, used to undermine the Puritan colony in Massachusetts. He fought back against the Devil’s legions as best he could, primarily with sermons and his quill. With his help many alleged followers of Satan became casualties of the then court system.

The accounts contained in this book are super spooky and if a Harvard-trained Puritan minister supporting the admissibility of spectral evidence in court doesn’t scare you I don’t know what will. I just hope you don’t run into any demons, witches, or spectres this Halloween. Or, if you become one yourself, that spectral evidence isn’t laid out against you. Instead, come to Special Collections at the J. Willard Marriott Library and let your socks be scared off while reading Mather’s accounts of the Salem witch trials.