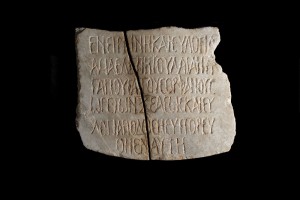 A piece from the rare book collections is on loan at the Utah Museum of Fine Arts, in its ongoing exhibition,  Ancient Mediterranean Art: Res Mortis. The piece may be viewed at the museum through September, 2018. 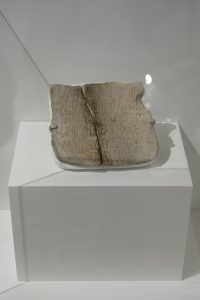 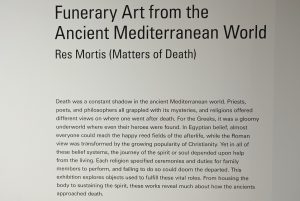 The carved fragment of limestone celebrates the life of Helene, to whom is given the credit “In peace and blessing Ama Helene, a Jew, who loves the orphans, [died]. For about 60 years her path was one of mercy and blessing; on it she prospered.”

The piece has been at the J. Willard Marriott for nearly thirty years, a gift of Aziz S. and Lola Atiya. Aziz Atiya founded the University of Utah’s Middle East Center and the Marriott’s Middle East Library in 1969. Rare Books holds many gifts from Dr. and Mrs. Atiya, including this epitaph and one of the largest collections of Arabic papyrus fragments in the world.

When the epitaph was given to the library, it was provisionally identified as a “Coptic inscription, dating from the dawn of the use of the Greek alphabet, not earlier than the second century, but not later than the third.”

Years later, in 2016, Lincoln Blumell, associate professor of ancient scripture, at Brigham Young University translated it, publishing his translation in Journal for the Study of Judaism in the Persian, Hellenistic and Roman Period. News of the piece attracted world wide press attention.