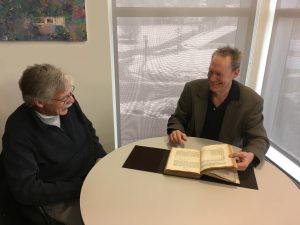 Delighting over the first edition of Isaac Newton’s Principia

Remember snow? Winter is coming! Last January, Dean Henry White, College of Science, and Ben Bromley, Chair of the Department of Physics and Astronomy, trudged through the snow to Rare Books to look at our first edition of Isaac Newton’s Principia (1687) and other books from our history of science collection.

You are invited to “Pioneers of Science: Ten Thousand Pages That Shook the World,” the opening lecture for the College of Science‘s Frontiers of Science lecture series.

Join us for a lecture, reception, and hands-on display of some of our first editions of books that helped make the world what it is today.

From Euclid to James Watson, scientists have put their findings to parchment and paper. Euclid’s Elements of Geometry was first printed in 1482, just as soon as one of the masters of movable type figured out how to do it. It has been in print ever since. Isaac Newton was reluctant to take the time, but his friend Edmond Halley insisted, and so we have Newton’s Principia, printed in 1687. The Marriott Library has first editions of both of these works, and first editions of books by other pioneers of science: William Gilbert, Johannes Kepler, Galileo, Antoine Lavoisier, Carl Gauss, Charles Lyell, Charles Darwin, Michael Faraday, Louis Pasteur, Marie Curie, and more. Each of these books has its own story to tell. Together they give insight into the communication, conversation, collaboration, and controversy that made science possible: a revolution that has been going on in print for more than five hundred years.

FREE AND OPEN TO THE PUBLIC 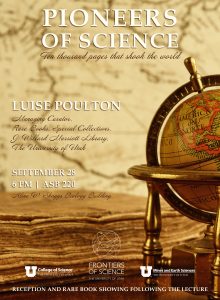