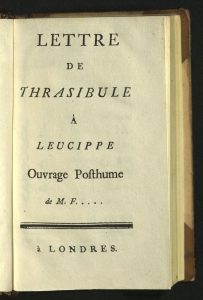 ““How could the human mind progress, while tormented with frightful phantoms, and guided by men, interested in perpetuating its ignorance and fears? Man has been forced to vegetate in his primitive stupidity: he has been taught stories about invisible powers upon whom his happiness was supposed to depend. Occupied solely by his fears, and by unintelligible reveries, he has always been at the mercy of priests, who have reserved to themselves the right of thinking for him, and of directing his actions.”

An anti-religious and atheistic attack on superstition, this work compares ancient religions and considers Christianity to be a mixture of Judaism and the religions of Egypt. The work was attributed to Nicolas Freret (1688-1749), but is now considered to be by Paul Holbach, who frequently used the names of deceased writers on the titles of his books in order to disguise his authorship. Nicolas Freret was well-known and highly esteemed in his lifetime, but left little of his own writings.

Paul Holbach was a French-German encyclopedist and prominent as a salonist in Paris during the French Enlightenment. He supported Denis Diderot financially and contributed articles and translations to L’Encyclopedie – in all about 400 pieces. His salons were exclusively male and attended by such notables as Jean-Jacques Rousseau, Adam Smith, David Hume, Horace Walpole, Edward Gibbon, David Garrick, Laurence Stern, Cesare Beccaria and Benjamin Franklin. Well-fed, his guests were surrounded by Holbach’s three thousand-volume library.

Holbach is recognized today for his philosophical writings, published anonymously or under pseudonyms, and printed outside of France. His writings, however, were certainly recognized in his own day. Voltaire, who was sometimes accused of writing these polemics, made it known that he was not a fan of the « anonymous » Holbach’s work.