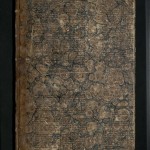 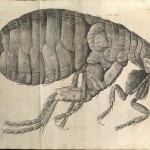 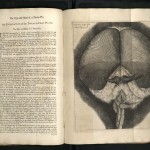 Robert Hooke, a gifted student, became the research assistant to Robert Boyle, founding member of the Royal Society. He was appointed Curator of Experiments in 1662 and by 1663 was conducting microscope demonstrations for the Society. Within months, Hooke was invited to Whitehall, where he demonstrated some of his exciting findings to King Charles II.

By order of the King, his discoveries were then published as a commemorative book, Micrographia, in 1664.  Micrographia was an instant bestseller.  Samuel Pepys, who owned a microscope during his tenure at the Navy Office, wrote that he liked Micrographia better than any other book he had purchased, and that he sat up half the night reading it. Seventy years later, plates from the original edition were reprinted by Henry Baker, an amateur enthusiast of Hooke’s work. This new book, Micrographia Restaurata, was published in 1745 and again in 1780.