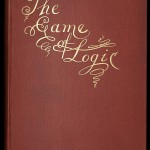 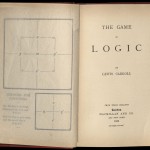 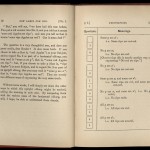 Carroll, The Game of Logic, 1886, Propositions 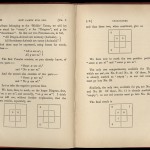 Carroll, The Game of Logic, 1886, Syllogisms

This edition, printed by E. Baxter of Oxford, was condemned by Lewis Carroll before publication and thus has been described by bibliophiles as the “first, private” edition. Carroll caused similar first or not-first edition woes with the first printing vs. the first official publication of Alice’s Adventures in Wonderland twenty years earlier. The Game of Logic was issued with an accompanying printed envelope containing two diagrams on a card and nine colored counters. Title page and envelope both dated 1886. Bound in original red cloth, gilt lettering. There were approximately fifty copies of this edition printed. Carroll, a mathematician, created this game which combines various forms of syllogism with his literary zeal for nonsense.