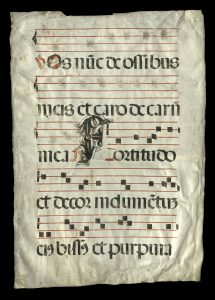 V. (You are) bone now from my bones
and flesh from my flesh.
Strength
and beauty (are her clothing:
silken linen and purple… 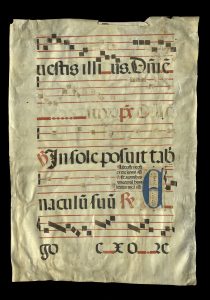 are her vestment O Lord
In the sun (on high) he has placed
his tabernacle [or, tent] V. You have freed me, Lord
from the mouth of the lion Alleluia
R. And my humility from the horns
of the unicorns Alleluia
(I came forth) from the mouth (of the Most High)

These hymns were sung at matins on the Feast of the Immaculate Conception of the Blessed Virgin Mary…celebrated on December 8. Many people believe that the feast celebrates Jesus’ conception, but in fact it celebrates Mary’s Immaculate Conception; the fact that Mary was, from the very first moment of her existence (her conception), without sin, and chosen to be the Mother of Jesus. The verses are in antiphonal Plainchant, a pattern of verse and response much like hymns sung today with “call and response.” At matins, a…part of the Divine Office sung early in the morning, a priest or cantor would sing the verse and the choir would respond. The first verse “Os nunc de ossibus” comes from Genesis (2, 23) where Adam exclaims upon the creation of Eve: “This at last is bone from my bones and flesh from my flesh” (Jerusalem Bible). Mary is in some ways a counter-Eve, immaculately conceived and the mother of Christ rather than the mother of Cain and cause of expulsion from the garden. The response “Fortitudo et decor” comes from the last chapter of Proverbs (31, 25) which is the “Alphabetic Poem on the Perfect Wife,” a chapter in which each verse begins with a consecutive letter of the Hebrew alphabet. This verse begins with the Hebrew letter “ain.” The verse “Ex ore prodivi” comes from chapter 24 of Ecclesiasticus and the Discourse or Eulogy of Wisdom, the pivotal chapter in the book. Here personified Wisdom speaks of her own creation, and she is identified with the Word of God hovering over the abyss in Genesis. The verse “Liberasti me” is a variation of prayer for aid and salvation from “the virtuous man” of Psalm 21 (22) where he prays in the imperative “Salva me ex ore leonis.”

~Description by Elizabeth Peterson, associate professor, Dept. of Art & Art History, The University of Utah, from Paging Through Medieval Lives, a catalog for an exhibition held November 2, 1997 through January 4, 1998 at the Utah Museum of Arts.