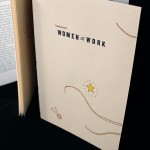 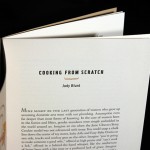 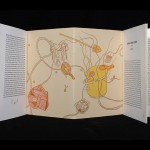 Three texts (“Consuming labor: a preface to Wo/Men at Work” by Matt Basso and Andrew Farnsworth, “Cooking from Scratch” by Judy Blunt, and “Everything’s dangerous: an essay from the 1941 collection Men at Work” by Ralph Powell) printed in a W-fold pamphlet. Titles printed on opposite covers. From the colophon: “…Book Arts Program staff contributors are Managing Director Marnie Powers-Torrey, Creative Director David Wolske, Laura Decker, Claire Taylor, Becky Thomas and Emily Tipps. David designed and typeset the text. The typefaces, evocative of the 1930s and ‘40s printshop vernacular, are as follows: bold titling is Hamilton, a revival of a popular 19th century wood type; bylines and colophon are Franklin Gothic, a workhorse sans serif found in printshops across America; italic subheadings are Cheltenham Italic, a ubiquitous early 20th century serif design; and the main body typeface is a version of Fairfield, released in 1939 and designed for the Linotype machine. Claire and Laura produced the saddle and pressure cooker drawings, respectively, in dialogue with the essays and one another…Andrew [Farnsworth], Dayna Kerns, and Chris Dunsmore, under the direction of Book Arts staff, letterpress-printed the imagery and text from photopolymer plates on Rives Heavyweight and BFK papers. Emily oversaw binding design and production of the W-fold pamphlet…Associate Director for Special Collection Greg Thompson provided the committed support that helped make this endeavor a reality.” Edition of twenty-six copies. University of Utah copies are letters ‘U’ and ‘V.’

Congratulations to the Book Arts Program and Red Butte Press staff for receiving one of 7 AIGA 100 Show Professional Copper Ingot awards for Wo/men at Work. The AIGA 100 Show showcases the year’s best design, advertising, and digital media. Of those pieces, a select few are awarded the Copper Ingot, one of the most sought-after communication awards in the Intermountain West. Visit http/aigaslc100show.com for information, to view pictures from the awards ceremony, and download the 100 Show Book PDF.