American Revolution, Fort McHenry, Francis Scott Key, Great Britain, James Madison, patriotism, printers, propaganda, Revolutionary War, S. Woodworth & Co., Star Spangled Banner, The Defense of Fort McHenry, The War. Being a Faithful Record of the Transactions of the War between the United States and their Territories and the United Kingdom of Great Britain and Ireland, United States, War of 1812 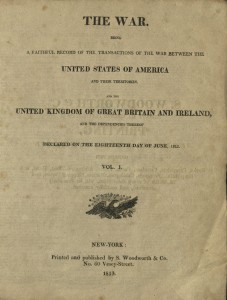 Title: The War. Being a Faithful Record of the Transactions of the War between the United States of America and their territories and the United Kingdom of Great Britain and Ireland 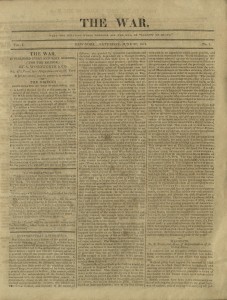 James Madison has the unfortunate distinguishment of being the first President of the United States to ask Congress to declare war on another nation. In the early nineteenth century the United States struggled as a young nation against more powerful countries for legitimacy. Americans were mostly farmers and, having thrown off the chains of British oppression by winning the Revolutionary War, most returned to their plows. In succeeding in their worthy cause they wounded deeply the pride of the great lion across the Atlantic Ocean. For the British it was a stinging wound not easily forgotten. The American Revolution stopped many infringements in the former colonial states, but Britain continued to teach the traitorous Americans a “lesson” abroad.

In early 1812 the executive leader of the infant nation knew that without further action his country would continue to suffer under economic bondage resulting from Britain’s policies. After diplomatic solutions failed, President James Madison made a report to Congress on the continued abuses laid upon the country by Great Britain and requested the country declare war against the abusers. His request resulted in the War of 1812, a conflict that gave us our national anthem, “The Star Spangled Banner,” and ultimately culminated in greater legitimacy as a sovereign nation.

More than slightly ironic, the United States’ federal government itself at the time fought for legitimacy. The state governments were powerful and for most citizens the necessity for war with Great Britain ended with the winning of the Revolution. Public opinion precluded support for a war because if there is one aspect of war that is constant and unchanging it is that war is expensive. No one wanted to pay for a war. How then would the federal government generate the support necessary to successfully defeat another nation with arguably the most powerful navy of the period? The answer: information. People needed to know why it was important to once again challenge Great Britain and be educated on the stakes of not doing so.

Printers played a crucial role in accomplishing this. They printed and sold newspapers, generating support for the federal government’s decision to declare war on Great Britain. Historians refer to this as war propaganda. 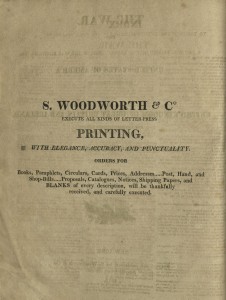 The word “propaganda” holds many negative connotations, but beauty is in the eye of the beholder and perspective matters. The act of uniting the United States would have been impossible without it. In the first issue of The War. Being a Faithful Record of the Transactions of the War between the United States of America and their territories and the United Kingdom of Great Britain and Ireland the editor tells the reader that the object, or purpose, of this publication includes: “To diffuse knowledge in the art of war, by communicating improvements calculated to render courage efficient against the enemy” and “To hand down to posterity the names of those heroes of America, who, by patriotism or courage, will signalize themselves in the present contest.”

The first issue of the publication provides the reader with a brief history in regards to the necessity of the American Revolution. The section ends with the conclusion that the United States’ quick recovery from that war led to its ability to economically compete with Great Britain and consequently caused that nation to become envious. The paper then offers two reports given by President Madison on the acts and injustices committed against the United States by Great Britain.

In issue number two the reader is confronted with examples of acts of patriotism and support. One section with the title “PATRIOTISM” offers an open invitation, almost a challenge, to the reader. One entry reads: 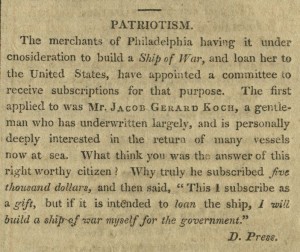 A Call for Patriotic Action

Support for the war did come from the nation’s citizenry and ultimately the United States succeeded in proving its sovereignty.

On September 12th, 1814 Frances Scott Key witnessed an attack on Baltimore, Maryland’s Fort McHenry from aboard a British ship. The next day he wrote a poem he titled “The Defense of Fort McHenry.” It was printed in newspapers. The United States’ victory at Fort McHenry in September 1814 turned the war in its favor. Frances Scott Key’s poem began to be sung set to a popular English tune (“To Anacreon in Heaven”) and in 1931 became our national anthem, “The Star Spangled Banner.”

Without support-generating propaganda such as The War, the United States may not have won the War of 1812 and we might be singing something other than “The Star Spangled Banner” at patriotic events. The War provides a glimpse into what the leaders of a young nation two hundred years ago needed from the country’s citizens in order to become the nation it is today.

Editor’s note: Dr. Ronald Rubin has been a generous supporter of the Rare Books Department for years. For more about his donations see Dr. Rubin.