The staff of the Rare Books Division extends its heartfelt condolences to the family of Brooke Hopkins. Professor Hopkins was a friend of the rare book collections through his donation of several books, each of which has been used by students for research and the Rare Books staff for lectures, presentations, and exhibitions. We are ever grateful for his generous support. Thank you, Brooke. Memory eternal! The beings of the mind are not of clay;
Essentially immortal, they create
And multiply in us a brighter ray
And more beloved existence…
–Lord Byron from Childe Harold

PSEUDODOXIA EPIDEMICA
Sir Thomas Browne (1605 – 1682)
London: Printed by R.W. for N. Ekins, at the Gun in Paul’s church-yard, 1658
Third edition, corrected and enlarged by the author

In this famous book, the writer and physician from Norwich demonstrated the absurdity of commonly presumed truths. Among the traditions which Thomas Browne deposed of were the beliefs that “The Elephant hath no joynts, That an Horse hath no Gall, That the Chameleon lives only by Aire, That the Ostridge digesteth Iron; That the forbidden fruit was an Apple; That our Savior never laughed, That a man have one rib lesse than a woman, That there was no Rainbowe before the flood.” University of Utah copy gift of Brooke Hopkins. 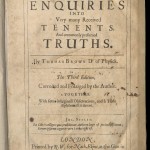 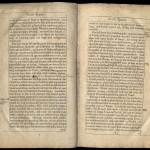 English poet Thomas Gray was educated at Eton in Cambridge. There he met Horace Walpole, the father of the Gothic novel, and traveled with him throughout Europe. After his return to Cambridge, where he remained for most of his life, Gray lived in seclusion. Much of Gray’s poetry was tinged with melancholy. Richard Bentley (1708-1782), another friend of Walpole’s, created illustrations for several of Gray’s poems. Gray admired the drawings very much. This book contains six engraved plates, thirteen engraved vignettes, and six engraved initials by Muller and Grignon based upon designs by Robert Bentley. University of Utah copy on loan from Brooke Hopkins. 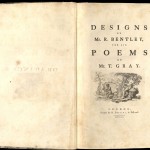 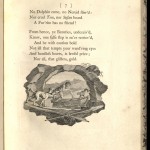 
THE DISCOVERY, SETTLEMENT, AND PRESENT STATE OF KENTUCKE: AND AN ESSAY TOWARDS THE TOPOGRAPHY AND NATURAL HISTORY OF THAT IMPORTANT COUNTRY; TO WHICH IS ADDED, AN APPENDIX, CONTAINING, I. THE ADVENTURES OF COL. DANIEL BOON, ONE OF THE FIRST SETTLERS, COMPREHENDING EVERY IMPORTANT OCCURRENCE IN THE POLITICAL HISTORY OF THAT PROVINCE. II. THE MINUTES OF THE PIANKASHAW COUNCIL, HELD AT POST ST. VINCENTS, APRIL 15, 1784. III. AN ACCOUNT OF THE INDIAN NATIONS INHABITING WITHIN THE LIMITS OF THE THIRTEEN UNITED STATES…IV. THE STAGES AND DISTANCES BETWEEN PHILADELPHIA AND THE FALLS OF THE OHIO; FROM PITTSBURGH TO PENSACOLA AND SEVERAL OTHER PLACES. THE WHOLE ILLUSTRATED BY A NEW AND ACCURATE MAP OF KENTUCKE AND THE COUNTRY ADJOINING, DRAWN FROM ACTUAL SURVEYS…
John Filson (ca. 1747-1788)
Wilmington, DE: Printed by James Adams, 1784
First edition

Land speculator John Filson’s early history of Kentucky contained, among other appendices, a narrative of Daniel Boone. Filson was the first American to write about the area. The book was very popular and helped influence the decision of many to migrate to this newly opened land. A tipped-in map is missing in most copies, as it is in this one. The map is so rare that antiquarians began to suspect that there never was one, in spite of reference to it on the title page. However, the Philadelphia Library has a copy with map intact. The map, drawn by Filson, was printed separately in Philadelphia. Filson was killed by Indians of the Ohio. University of Utah copy gift of Brooke Hopkins. 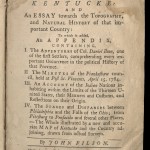 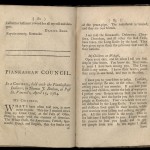 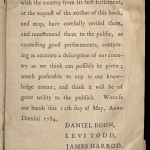 Alexander Pope’s Essay on Man, first published in 1733, was a philosophical work consisting of four epistles in couplets and addressed to his friend, Henry St. John Bolingbroke, head of the Tory ministry. University of Utah copy gift of Brooke Hopkins. 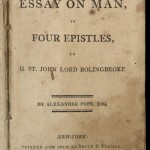 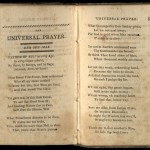 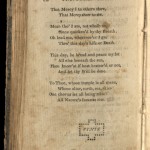 
THE ILIAD OF HOMER TRANSLATED FROM THE GREEK BY ALEXANDER POPE
Homer
Baltimore: Philip H. Nicklin, 1812

Stationer Philip H. Nicklin (1786-1842) studied law. Due to financial difficulties after the death of his father in 1807, Nicklin began selling books, first in Baltimore then in Philadelphia. After 1827, he confined his bookshop’s inventory to law. He retired in 1839, having earned enough money to live out his life in comfort. He occupied the rest of his short life with writing, mostly about literary copyright. This book, although sold from Baltimore, was printed in Philadelphia by Fry and Kammerer. William Fry (d. 1854) formed a printing partnership with Joseph L. Kammerer in 1806. Fry was a well-respected pressman, compositor and proof-reader. Fry and Kammerer separated in 1810, but renewed their joint printing efforts a year later. In 1814, Kammerer died. Fry was the first to use the newly developed Columbian press, and ordered several of them for his large print shop. Added title-page engraved. University of Utah copy gift of Brooke Hopkins. 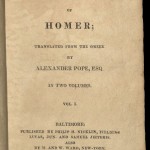 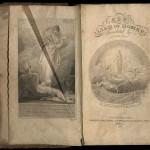 
THE POETICAL WORKS OF LORD BYRON…: CONTAINING ALL HIS POEMS, ORIGINAL AND TRANSLATED, FROM THE LATEST EDITIONS
George Gordon Byron (1788-1824)
Baltimore: B. Edes, 1814

Benjamin Edes, the son and grandson of printers from Maine and Boston, continued the family business in Baltimore, where he worked as job printer and printed the newspaper, The Minerva and Emerald. Benjamin was an officer in the 27th Militia during the War of 1812 and supposedly printed the first version, in the form of handbills, of Francis Scott Key’s poem, “The Star Spangled Banner.” According to one story, the manuscript was taken to Edes’ printing shop, located on the corner of Baltimore and Gay Streets. Edes was on duty with his regiment, so the typesetting and printing was done by his apprentice, Samuel Sands, only twelve years old. Benjamin’s father, Peter Edes, moved from Boston to work for Benjamin, typesetting and keeping account books until 1832. Peter’s wife and Benjamin died that year of cholera. Peter returned to Maine, where he died in 1840. At the time of his death, according to his obituary in the Baltimore Sun, he was the oldest printer in the United States. Benjamin Edes’ grandfather, after whom he was named, participated in the Boston Tea Party. He was the printer of The Boston Gazette and Country Journal. University of Utah copy gift of Brooke Hopkins. 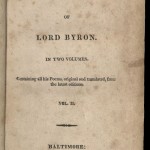 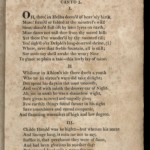 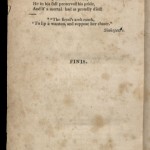 Fielding Lucas, Jr. (1781-1854) was a prominent publisher and cartographer in the early 19th century. He was especially recognized for his excellently produced maps. Lucas founded his first print shop in 1804 and became the first stationer of the newly formed United States. In 1806, Lucas became a partner in the Philadelphia publisher and bookselling firm, M. & J. Conrad, which focused on schoolbooks, maps, atlases, art instruction, children’s literature and Roman Catholic religious material. Baltimore, in most part because of Lucas, became the major center for Roman Catholic publishing through the beginning of the twentieth century. Lucas was a leader in the effort to raise funds for the Washington Monument. He was a founder of the Maryland Historical Society and the Maryland Institute College of Art. Added engraved title-page printed in Philadelphia by John Conrad. University of Utah copy gift of Brooke Hopkins. 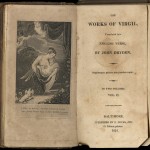 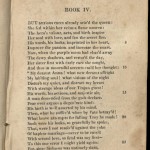 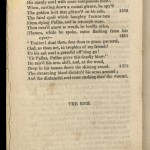 
THE POETICAL WORKS OF ALEXANDER POPE: IN THREE VOLUMES COMPLETE, WITH HIS LAST CORRECTIONS, ADDITIONS, AND IMPROVEMENTS, TOGETHER WITH ALL HIS NOTES AS THEY WERE DELIVERED TO THE EDITOR A LITTLE BEFORE HIS DEATH TOGETHER WITH THE COMMENTARY AND NOTES OF MR. WARBURTON
Alexander Pope (1688-1744)
Philadelphia: S. A. Bascom, 1819 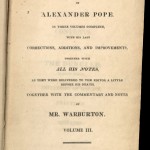 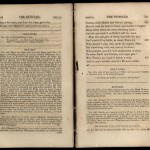 
ADDRESS DELIVERED BEFORE THE ALUMNI AND THE SENIOR CLASS OF THE UNIVERSITY OF NORTH CAROLINA…
Charles Manly (1795-1871)
Raleigh, NC: Printed by T. Loring, 1838 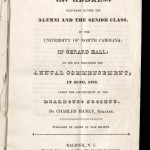 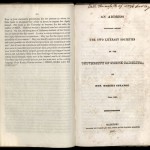 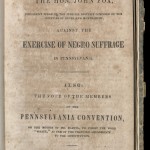 
THE VISION OF HELL
Dante Alighieri (1265-1321)
London: Cassell, Petter, and Galpin, 1866
New edition: with critical and explanatory notes, life of Dante, and chronology

Translated by Henry Franci Cary. Illustrated with the designs of M. Gustave Doré. Each plate accompanied by leaf with descriptive letterpress. University of Utah copy on loan from Brooke Hopkins. 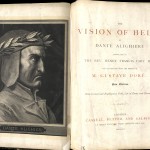 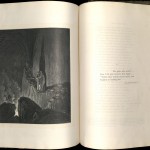 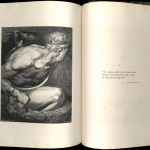