“It is a prayer for the rebirth of a way of writing with breath.” 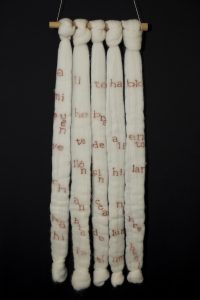 Quipu, or knotted cords, encoded the spoken language of the Inca, representing both single sounds and whole words, and was used as a form of communication for nearly 5000 years before it was banned by the Spanish in 1583. From the booklet: “Chanccani Quipu reinvents the concept of ‘quipu,’ the ancient system of ‘writing’ with knots, transforming it into metaphor in space; a book/sculpture that condenses the clash of two cultures and worldviews: the Andean oral universe and the Western world of print.” From the colophon: Jerome Rothenberg assisted Cecilia Vicuña in translating her poem.” Edition of thirty-two copies, numbered and signed by Cecilia Vicuña and Jerome Rothenberg. University of Utah copy is no. 14.