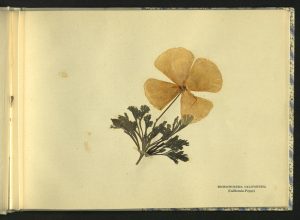 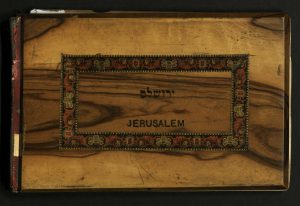 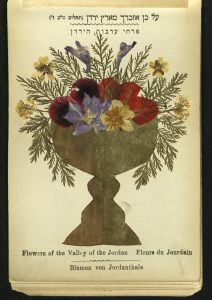 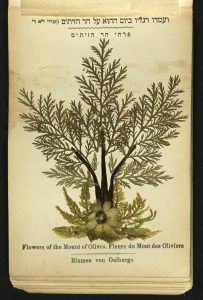 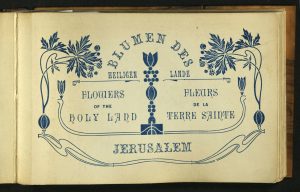 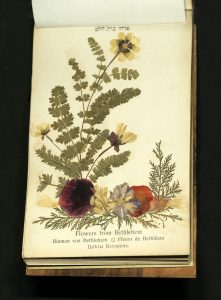 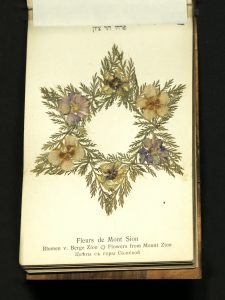 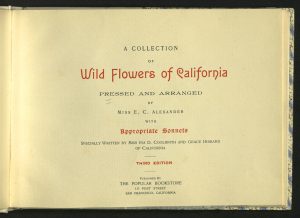 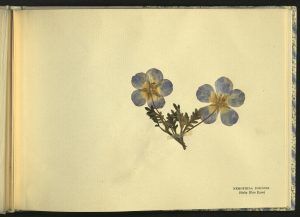 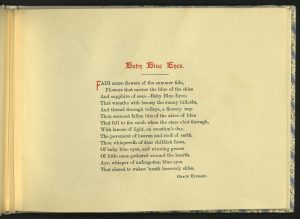 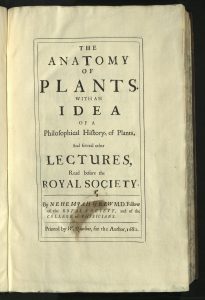 “At a Meeting of the Council of the Royal Society, Fe. 22. 1681/2 Dr. Grew having read several Lectures of the Anatomy of Plants, some whereof have been already printed at divers times, and some are not printed; with several other Lectures of their Colours, Odours Tasts, and Salts, as also of the Solution of Salts in Water; and of Mixture; all of them to the satisfaction of the said Society; It is therefore Ordered, that He be desired, to casue the to printed [sic] together in one Volume.” — Chr. Wren P.R.S.

Anatomy of Plants: With an Idea of a Philosophical History of Plants and Several Other…
Nehemiah Grew (1641-1712)
London: Printed by W. Rawlins, for the author, 1682
First edition
QK41 G82

Rare Books was recently graced with a visit from a member of the Royal Society and two other guests, all three royalty in the world of science. This visit and the accompanying bright blue spring skies brought to mind flowers, vegetable gardens, herb gardens and this book. The great Sir Christopher Wren, founder and then-president of the Royal Society, “Ordered” Nehemiah Grew to publish the work presented here. 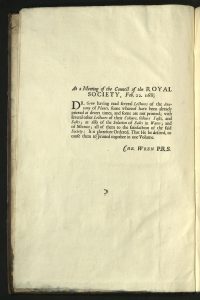 Nehemiah Grew was a physician, but made his reputation in the fields of plant morphology and anatomy. At the Royal Society, he met Robert Hooke, who was progressing in his studies in the field of microscopy. At the same time that Marcello Malpighi presented papers to the Society, Grew presented his The Anatomy of Vegetables Begun (1672). Both men reported on the cellular construction of the woody parts of plants, the beginning of a hypothesis of a cellular theory of plant life. Grew’s work led him to the announcement  that there were two sexes in plants.

This book is based on three earlier publications, “The Anatomy of Vegetables Begun (1672),” “An Idea of Phytological History Propounded (1673),” and “The Comparative Anatomy of Trunks (1675)”, together with a fourth unpublished book, “The Anatomy of Leaves, Flowers, Fruits, and Seeds,” dedicated to Robert Boyle, and six discourses that had been delivered before the Royal Society. 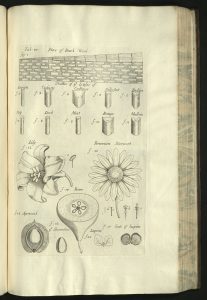 In Grew’s dedicatory epistle to King Charles II, he wrote, “Your Majesty will here see, That there are those things within a Plant, little less admirable, than within an Animal. That a Plant, as well as an Animal, is composed of several Organical Parts; some whereof may be called its Bowels. That every Plant hath Bowels of divers kinds, conteining divers kinds of Liguors. That even a Plant lives partly upon Aer; for the reception whereof, it hath those Parts which are answerable to Lungs. So that A Plant is, as it were, an Animal in Quires; as an Animal is a Plant, or rather several Plants bound up into Volume.”

Nehemiah Grew’s work turned the anatomy and physiology of plants into a new science. This is the first book in which Robert Hooke’s newly invented microscope is demonstrated for the examination plants. 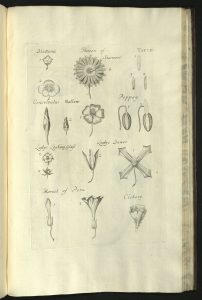 Grew began his studies with naked-eye observations and then continued with observations seen at the higher magnifications made possible with Hooke’s microscope.

“…all the Observations conteined in the First Book, except one or two, were made with the Naked Eye. The the end, I might first give a proof, How far it was possible for us to go, without the help of Glasses: which many Ingenious Men want; and more, the patience to manage them. For the Truth of these Observations, Seignior Malpighi, having procured my Book to be translated into Latin for his private us, speaks his own sense, in some of his Letters to Mr. Oldenburge, printed at the end of his Anatomy of Plants…Having thus begun with the bare Eye; I next proceeded to the use of the Microscope. And the Observations thereby made, first on Roots, and afterwards on Trunks and Branches, together with the figures…” 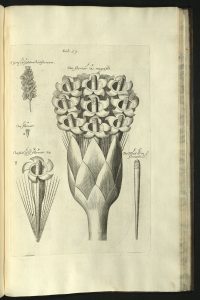 Through these observations he was able to describe the structure of stems and roots by the combined use of transverse, radial, and tangential longitudinal sections.

“In the Plates, for the clearer conception of the Part described, I have represented it, generally, as entire, as its being magnified to some good degree, would bear…Yet have I not every where magnify’d the Part to the same degree; but more or less, as was necessary to represent what is spoken of it. And very highly, only in some few Examples, as in Tab. 40. which may suffice to illustrate the rest. Some of the Plates, especially those which I did not draw to the Engravers hand, are a little hard and stiff: but they are all well enough done, to represent what they intend.” 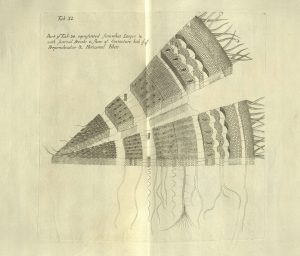 Swedish botanist Carl Linnaeus dedicated a genus of trees to Grew in appreciation of his work. Few important advances on the ideas of Grew would be made for nearly another one hundred years. 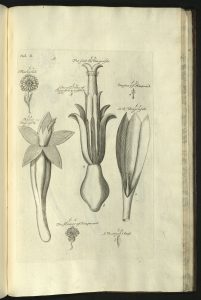 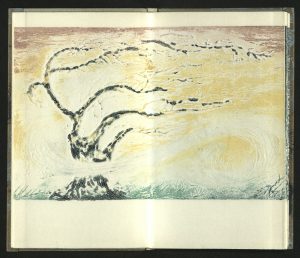 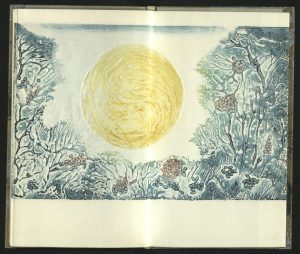