Every country has a history – that is certain. If we are too young to know our history through life and experience, textbooks can only try to educate us a little further. Unfortunately, the academic rhetoric of such books distances us from the very roots of history, the emotional and personal connections between a country and its citizens where the story of a culture is revealed. This story can only be found within the language of literature.

Recently, I was looking for the story of Argentina. As I walked along the sidewalks of the capital city in the interior province of Córdoba, the modern roads and upscale storefronts clashed with the colonial architecture of the popular Jesuit churches. It was the Jesuit Order which founded the oldest university in the country, and gave Córdoba city the nickname, “The Learned One.” 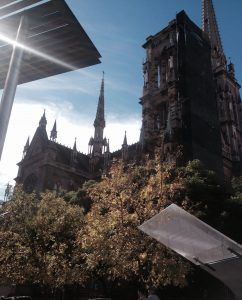 In order for me to learn more about this country, I had to explore the hidden nooks and crannies which veered off main roads. These quiet alleyways acted as a personal time machine and led me even further into the history of Argentina, into old bookstores covered in dust and filled with the smell of lingering memories and dreams.

My presence in the small bookstore on Avenida 9 de Julio was initially ignored, much like many of the old photographs and postcards that had been lost or forgotten. I lingered quietly in between the stacks of books for a while, before I decided to formally introduce myself to the two old men drinking mate at the counter. 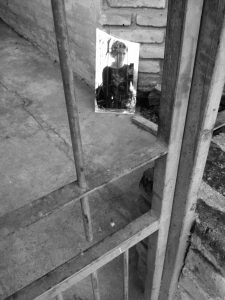 My newly acquired Argentine accent complimented my foreign mystique, and led the owner to realize that I wasn’t merely a tourist passing by. His eyes opened wide and he smiled, directing me to sit in a dusty chair and wait. Espera. I settled in to the soft, velvet cushions, excited by the all the fragile pages of the venerable books around me. That excitement I felt was elevated to extremes when the owner returned with a dozen or more first edition books and set them in front of the chair. Para vos, he said, for you. 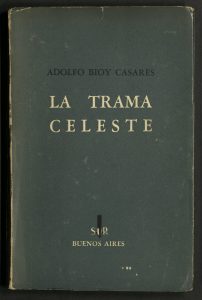 In Memory of Paulina:
I always wanted Paulina. In one of my first memories, Paulina and I are hidden in a dark gazebo of laurels, in a garden with two stone lions. Paulina said to me: I like the blue, I like the grapes, I like the ice, I like the roses, I like the white horses. I understood that my happiness had begun, because in these preferences I could identify myself with Paulina. It seemed so miraculous to us that in a book about the final meeting of the souls in the soul of the world, my friend wrote in the margin: Ours already met. “Ours” at that time, meant hers and mine. 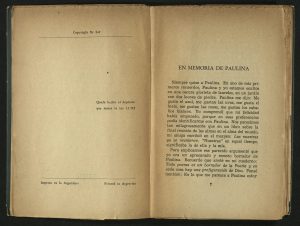 Translated into English as The Celestial Plot, this collection of short stories was first published in December 1948. By this time, Bioy Casares had already made a name for himself with the release of his novella The Invention of Morel (1940). In addition to his renowned literary works, his fame was elevated by his longstanding friendship with the Argentina’s literary hero, Jorge Luis Borges.

While both working with Sur magazine in the early 1930’s, the two writers met and before long transformed their friendship into a series of collaborative works, often published under the name of H. Bustos Domecq. Over the years, Bioy Casares and Borges, among others, worked to develop the growing genre of philosophical literature in Latin America, sometimes vaguely defined as Magic Realism, connecting dreams and reality through mazes, mirrors and memories, while consistently begging the question of identity.

Within an elite circle of intellectuals, the famous fantastical writers might have seemed impervious to the desolate reality of political, economic and social decline outside the walls of the publishing house. However, it was never too far from reach. Between the lines of their collected literary works the influence of their country’s politics can easily be seen.

In Borges’ collection of poetry Para Las Seis Cuerdas (For the Six Strings) the history of Argentina is depicted in a series of 11 milongas, folkloric songs written in the style of the famous Argentine tango. 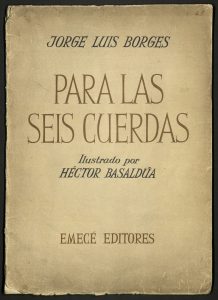 Someone Speaks of the Tango
Tango that I have seen dancing
Against a yellow sunset
By those who were able
Of another dance, that of the knife.

Tango from that Maldonado
With less water than mud;
Tango whistling in passing
From the side of the car.

Carefree and loose,
You always looked straight ahead,
Tango you were the one
To be a man and to be brave.

Tango you were happy,
Like I have been as well,
According to my memory,
Which is a little forgetful.

Since that yesterday, how many things
Have happened to us both;
The games and the regret
To love and not be loved.

I will have died and you will continue
Bordering our life;
Buenos Aires does not forget you
Tango that you were and will be 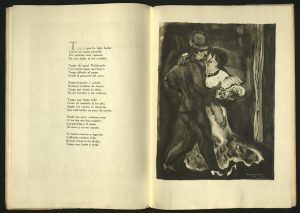 The tango is just one of the cultural phenomena written within Argentina’s diverse history, a history which asks all those who are part of it, or wish to study it, to participate in a continuous conversation. This conversation must include many countries, cultures and languages. Unlike common textbooks, the language of literature provides us with the key to get the very core of history and culture. Unlike textbooks, literature helps define solidarity and shows us how similar we truly are.

Contributed by Lyuba Basin, Rare Books Assistant and graduate student in World Languages and Culture at the University of Utah, who also provided the translations.

Editor’s note: Welcome home, Lyuba and thank you for your gifts!