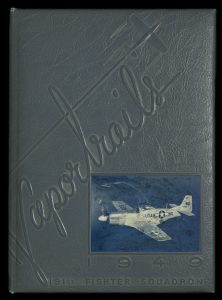 “Dedicated to the officers and men of the Utah Air National Guard whose past accomplishments, sincere endeavor, and esprit de corps have been an inspiration to all air units and with whom it has been our privilege to serve.” 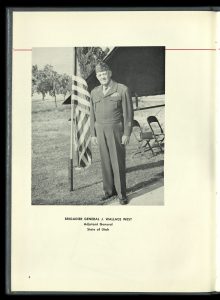 “It is with the feeling of pride that I take this opportunity to commend all members of the 191st Fighter Squadron and its allied units for the outstanding records achieved in the past three years. Your ratings of ‘Superior’ and the results of your Operational Readiness Tests, indicate that you are one of the outstanding air units of the United States. I salute you as a Utah National Guard unit, that fully merits the confidence of the people of our state.” 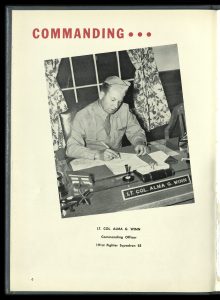 “I am proud, as you yourselves are proud, to have been a part of this organization which has made such an enviable record in its short history. I congratulate all of you, whether your job is on the ground or in the air, on your contribution to the work that has made the Utah Air National Guard the outstanding air unit it is today.”

“Organized as a tactical unit prepared to implement the regular Air Force in time of emergency, the 191st Fighter Squadron, after several months of extensive planning 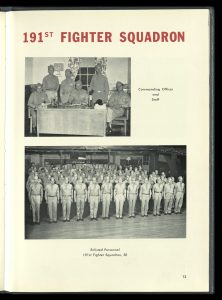 and preparation, was federally recognized November 18th, 1946. In its infancy, the squadron was commanded by Lt. Col. Jack J. Oberhansly who was later succeeded by the unit’s present commander, Lt. Col. Alma G. Winn. In its brief but colorful history, the squadron has grown from a complement of fifty-six officers and enlisted men to its present strength of three hundred and fifty – over ninety-seven percent of its authorized personnel. Based at Salt Lake’s Municipal Airport, the squadron began recruiting men from all communities in a widespread vicinity.”

“The first aircraft arrived on the base the 23rd of December, 1946. In the ensuing five months additional aircraft were received and by the 4th of June, 1947 the unit had all its planes and both Utility Flight and the Fighter Squadron were in full operation. 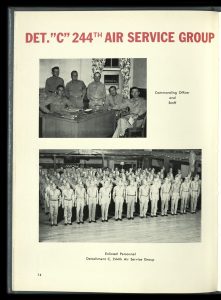 The squadron now had twenty-six F-51s, two C-47s, four B-26s, and four T-6s. With the advent of the aircraft, recognition of the Air Guard by the public became evident and a marked increase in morale and interest was indicated by all members of the organization. The roar of the planes overhead became commonplace to the citizenry of surrounding towns and cities as the squadron’s fighters streaked across the skys in successive flights. Pilots, crew chiefs, armorers, radio men – needed technicians and rated airmen were attached from the ranks of the ex-servicemen. Untrained recruits were enlisted and classified in “on-the-job-training” status, practical and classroom instruction was initiated and the training program gathered momentum.” 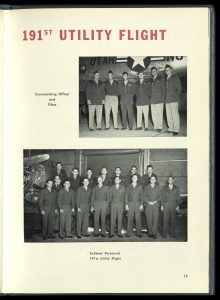 “During the nationwide “Operation 88, 888,” the unit exemplified itself in procurement of personnel. Detachment “C,” 244th Air Service Group, won national acclaim in recruiting and received a bronze plague [sic] from the National Guard Bureau for its efforts.”

“Publicity was received by the organization in its beginning. ‘Utah Air National Guard Unit to Hold Exhibit,’ ‘Air Guard Group to Conduct Enlistment Drive,’ ‘Guard Squadron Aids in Feeding and Rescue of Livestock,’ and numerous other articles began to appear in local and national publications. Such activities and accomplishments soon established the 191st Fighter Squadron as one of the outstanding units of the Air National Guard.” 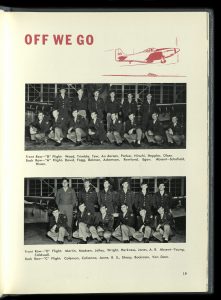 “The first building used by the Air Guard was the old Army hangar at the Salt Lake Municipal Airport. This structure was shared with an Airline and the arrangement proved very unsatisfactory due to the influx of men and equipment which could not be properly housed. Although this condition appeared to reduce efficient training and operations, the organization continued to progress. A new area, formerly part of the Salt Lake Army Air Base and located at the northern end of the airport, was allotted to the unit. A modern hangar and adjoining shop and supply buildings were constructed. Barracks, classrooms, mess hall and supply warehouses, long vacated, were renovated and prepared for use. The new area flourished and prospered until all needed facilities were available for squadron use.” 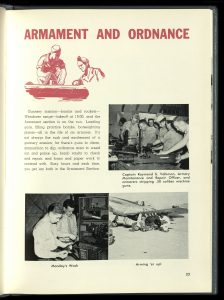 “The squadron has participated in three summer encampments since its activation. In 1947 the units were ordered to their first fifteen day tour of duty at their home station. Summer Camp in 1948 again found the squadron operating from their home base for a fifteen day period. During the summer of 1949, all units were flown to Victorville Air Force Base, California, for joint operations with units from California and Nevada under command of the 61st Fighter Wing. These summer camps were the “proving grounds” of the training and experience received during months of Monday night drill periods.” 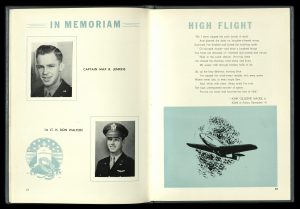 “As the pages of this book are turned, the story of the squadron, its accomplishments and achievements, its work and its pleasures, its heartaches and its laughter, will be found. Reminisce these three years past, Air Guard, and resolve to maintain and fulfill the responsibilities which are yours to the citizens of the United States.”

– from “The Organization – Its History” (pages ten and eleven) of Vapor Trails: 1949, 191st Fighter Squadron 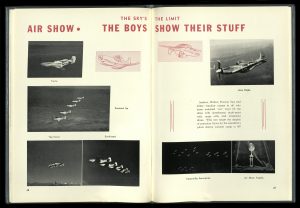