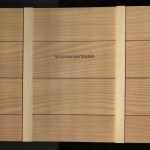 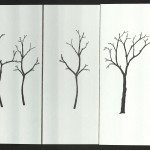 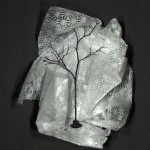 Carl and Marie Dern were born and raised in Utah, where they met as children. Winter Orchard was their response to the orchards they passed as they drove between Salt Lake City and Provo. Carl and Marie moved to California where Carl, a sculptor, opened a studio and Marie began collaborating with poets and authors and producing fine press books. “Jungle Garden Press” was named after their backyard. Many of its editions, including Winter Orchard, incorporate pieces of metal sculpture by Carl. Designed, printed and bound by Marie,  Winter Orchard includes a tree made of steel, brass, and tin. Box designed by Marie Dern. Edition of sixty copies. University of Utah copy is no. 8, signed by Carl and Marie Dern.