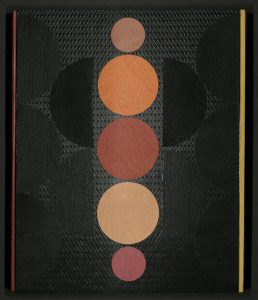 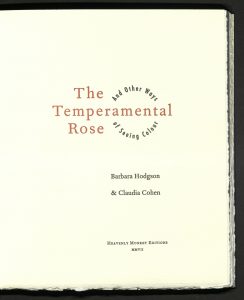 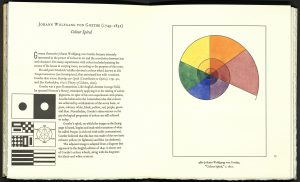 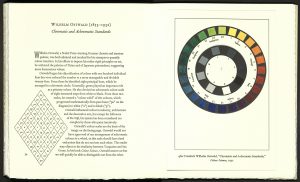 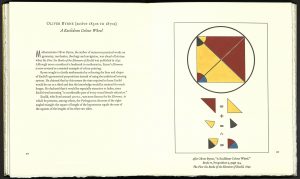 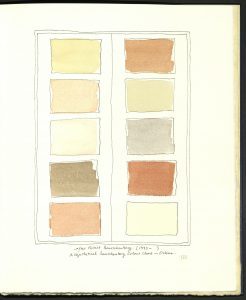 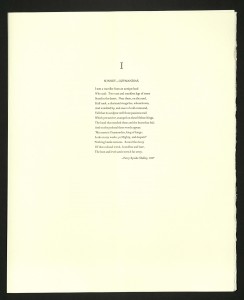 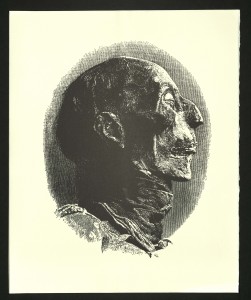 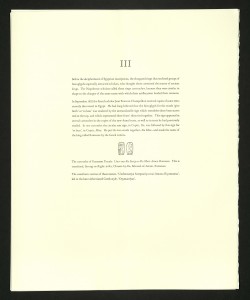 Sonnet by Percy Bysshe Shelley (1792-1822) and excerpts from ancient and modern works about Egypt. Engraving of head of mummy of Ramses II (1303 BC – 1213 BC) by Henry Wolf. Researched, designed and printed by Carol Kent. Printed on an 1840 Wood & Sharwood Albion. Set in Roulus with Cochin numerals. Printed on dampened cream-colored Rives Heavyweight with Arches Cover portfolio. Issued in cream-colored portfolio embossed with two cartouches and fastened with a beeswax seal on Egyptian papyrus strip, affixed with braided French perle and lacquered copper wire. Edition of one hundred copies. University of Utah copy gift of Gene Valentine. 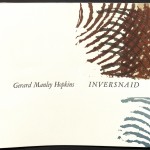 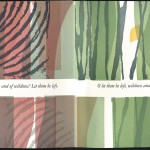 Colophon
“This book is frankly experimental in character. It is the product of a one-month Topics course taught at The Press at Colorado College by James Trissel. Six students were involved in the planning and printing of the poem in this manner which turned out to be more ala prima and less seriatum than one normally expects in book printing. The students are Betsey Biggs, Tully Bragg, Kelly Cress, Leigh Fletcher, Brian Molanphy, and James Schuster.

The paper is Arches Cover and the type, A T F Garamond. The inks for color-printing are generally lithographic inks printed relief from zinc and linoleum.

Although the poem, “Inversnaid,” is in the public domain, Oxford University Press gave us its blessings. There are fifty numbered copies; and this is 12.”