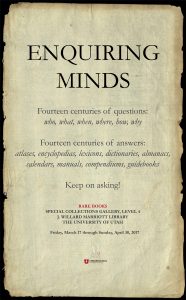 Humans have been compiling information to answer an infinity of questions for thousands of years. From Ptolemy to Izaak Walton, the best minds have annotated, edited, translated, measured, arranged, and defined what it means to live a life of wonder.

From facsimiles of medieval encyclopedias, almanacs and atlases to first editions of fifteenth through twentieth century dictionaries, manuals, lexicons, compendiums, and directories, Rare Books celebrates questions and the attempts to answer them.