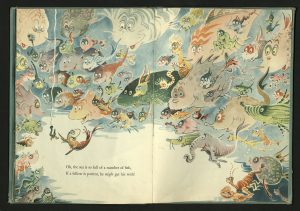 “Oh, the sea is so full of a number of fish,
If a fellow is patient, he might get his wish!”

This is the first of Dr. Seuss’s books to be illustrated in full color. Theodore Geisel, aka Dr. Seuss, dedicated this, his first book after leaving the Army and his fifth overall, to his father, the Superintendent of Parks in the Giesel’s hometown of Springfield, Massachusetts. The book garnered Seuss a nomination for the Caldecott Medal in 1948. Binding is variant b, with opened-mouth fish on front cover, lettering on spine and seven-line copyright statement. Rare Books copy inscribed by Dr. Seuss “For the Angel Ferris Children’s Reading Room with very Best Wishes.” 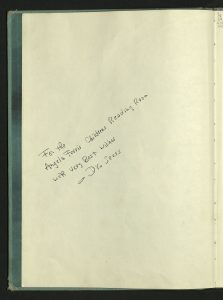 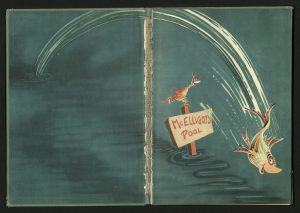 For, given man, by birth, by education,
Imago Dei who forgot his station,
The self-made maker who himself unmakes,
The only creature ever made who fakes,
With no more nature in his loving smile
Than in his theories of a natural style,
What but tall tales, the luck of verbal playing,
Can trick his lying nature into saying
That love, or truth in any serious sense,
Like orthodoxy, is a reticence.
— from “The Truest Poetry is the Most Feigning or, Ars Poetica for Hard Times”

Stanza quoted above from folded clipping out of The New Yorker, date unknown, found tucked into this copy after the title-page. 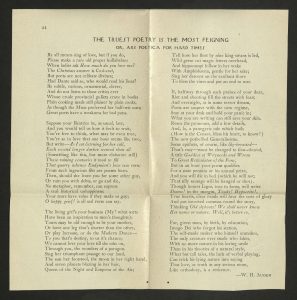 Rare Books copy inscribed and dated December 1954 by Auden to Eleanor Nicholes, who donated the book to us. 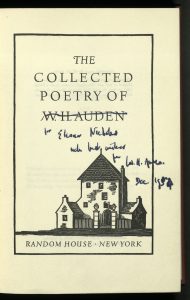