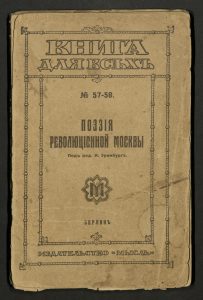 “All for the People and all Through the People” — Programma

Revolution had been bleeding red on the tongues of Russian citizens for a least a decade before the fateful Autumn of 1917 when the Bolsheviks seized power from Tsar Nicholas II, ending the 300 year monarchy of the Romanov family. Through a series of unanticipated events – seeming impossible and shockingly intertwined – the headstrong leftist Socialist revolutionaries took control of the Imperial government and captured the Winter Palace and became the world’s first socialist country. One hundred years later, we remember the Russian Revolution through the words of comrades, dissidents and descendants in a series of books found in our very own collection.

By the early 20th century another revolution had already swept across Europe, Asia and the United States. The industrial market was booming. Yet Imperial Russia found itself far behind in comparison to the surrounding, developing economies. In addition to newfound economic struggles, the country was becoming more difficult to govern as the population sprawled across 8.6 million square miles – nearly 1/6 of the earth’s landmass. Between the deadly winters and the barren soil, anyone outside the upper classes struggled to make a living and even struggled to live.

It was the contention between the different economic classes that became a fundamental component of Bolshevik strategy – aligning the proletariat with the peasantry to fight against the bourgeois leaders who controlled and exploited their working class citizens. Vladimir Lenin and Leon Trotsky, the founding fathers of the Russian revolution, organized and educated the masses, inspiring everyday people to stand up and fight for equality and human rights. During the year of revolt, an outline called “Programma” was printed in Odessa by the Social-Democratic Labour Party, detailing the social, political and economic issues at hand, and its method to finally reclaim the country for the people. 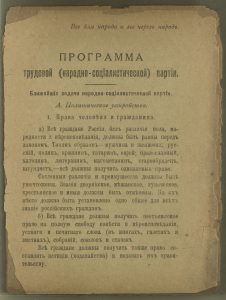 “All citizens of Russia, without distinction of sex, preoccupation and disposition, should be equal before the law. In this way – a man and a woman, a Russian, a Pole, an Armenian, a Tatar, an Orthodox Jew, a Catholic, a Lutheran, a Mohammedan, an old believer, a stuntman – all should get the same rights …”

Unfortunately not all of Russia’s citizens were given the same opportunity to participate with the increasingly fashionable revolutionaries. In fact, of the 170 million people who lived in the vast territory, 3/4 had been labeled ‘peasants’ and most among them could not read. While the participation of the peasantry was crucial to overthrowing the Tsarist rule, many of these rural villagers suffered greatly in the coming months and years as dramatic changes in urban governments left their communities incredibly destabilized. Once Bolshevik power had been gained, it became quickly noticeable that the Revolution, according to both Lenin and Trotsky, would benefit neither the bourgeoisie nor the peasants of Russia – the rewards of Revolution were given solely to the working classes, and even then, at quite the cost.

Amid the riots and marches that had become common since February and March of 1917, writers and artists were compiling their own narratives about what was going on in the streets. Some were critical of the violence and looting. Maxim Gorky and Marina Tsvetaeva were two such writers who depicted the chaos of the ‘wine riots’ where the cities cellars were taken over by citizens and Bolsheviks alike. The Bolsheviks saw an enemy among their drunk comrades and “replied with machine-guns pouring lead into the bottles… [destroying] three million rubles’ worth of vintage in the vaults of the winter palace.” Tsvetaeva, who changed allegiances over time, was concerned over the newfound ‘freedom’ and her poems often reflected musings about humanity, growing mobs and the unstable political state. In her poem, “To Tsar, on Easter” Tsvetaeva addresses Tsar Nicholas II and imagines the fall of the Russian Empire. Just three months after her poem was written, the Tsar was forced to abdicate the throne, leaving power in the hands of a provisional government. 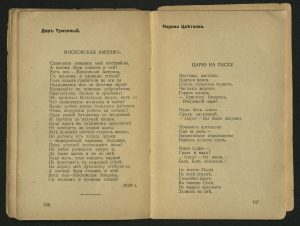 To Tsar, on Easter
Open, Open,
The gates of the tsar!
Darkness dimmed and poured out far.
With clean heat
Burns the altar –
Resurrect, Christ,
Yesterday’s tsar!

Without glory fell
Two-headed eagle.
Tsar – you were wrong.

Your judges –
Lightning and wave!
Tsar! God sought
You, not men.

But now there’s Easter
In all the land,
Sleep in your village
With a calm mind,
Don’t dream of
The banners red.

Tsar! Descendants
And ancestors – sleep.
There is a knapsack since
A throne you won’t keep.
– April 1917 (Translated by Ilya Shambat)

Although power had been stripped from the Tsar, the revolution was far from over. It would not be until October that the Bolsheviks would officially seize power. Behind the front lines many writers and artists worked to help deliver the party’s propaganda. By 1917, Vladimir Mayakovsky, renowned Russian Futurist, had already been a major player of the socialist cause for ten years. Tied to the political left, the Futurists often contributed to underground journals and protests, but they had their own agenda: seeking to reject the symbolic and romantic ideas enforced by an imperial Russia. Rather than conform to the stringent structures of literature developed by their renowned predecessors, they proposed a return to the earth and the primeval spirit of the Russian language. In doing so, writers and artists collaborated to develop books of poetry written in a style they passionately declared as Zaum. In the immediate aftermath of the October Revolution, Mayakovsky wrote “Our March” – a reflection on the frenzy and madness that had been taking place. Mayakovsky’s and Tsvetaeva’s poems were both included in a small collection of Revolutionary poetry published in Berlin, 1922. 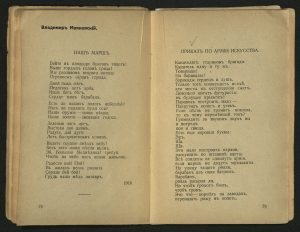 Our March
Let the squares ring to the tramp of revolt!
Lift your heads’ glorious mountain range higher!
We’ll cleanse all the cities around the world
With a flood even greater than Noah’s.

The days’ bull’s pied.
The years’ cart creaks.
Our god is speed.
Our heart’s drum beats.

Is our treasure, our gold not the loftiest thing?
Can we ever be stung by the wasp of a bullet?
Our weapon’s the songs that we sing.
Our voices are our gold bullion.

Look up! The skyful of stars is bored!
We weave our songs without the sky.
Hey, you there! Yes, you, Great Bear!
Demand we be taken to heaven alive.

Drink up the joy! Sing!
The veins’ spring’s sprung.
Heart! Fight! Ring!
Our breasts are the copper of kettledrums.
– December 1917 (Translated by James Womack) 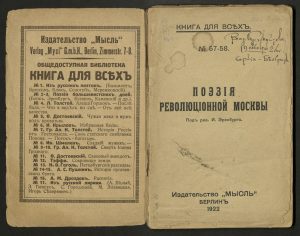 With the Social-Democratic Labour Party officially in control, there was now the question of who among the party’s officials would take the role of leadership, Lenin or Trotsky. Leninism and Trotskyism became the two dominant perspectives of the socialist movement and, while similar in many ways, the debate between two caused major conflict within the party. Allegiances were made and votes were taken. Trotsky came before a Communist Party court, consisting of Lev Kamenev and Joseph Stalin, to defend his positions. In the end, Lenin would eventually take power in 1922, and Trotsky would be banished to exile yet again just five years later. During his ongoing split from the party, Trotsky’s commentary on the differences between ‘Leninism’ and ‘Trotskyism’ was published in Berlin, 1925. Written in two parts, Trotsky first details the fateful events of the October Revolution before giving his final response to the court. Ultimately, it was Stalin who arranged his assassination. 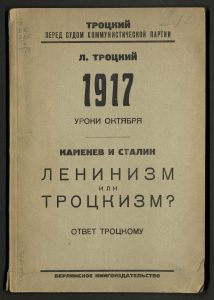 Lenin had a different fate. While his reign over the country only lasted seven years, his influence over the people remained for much longer. He was the face of the Revolution, and subsequently, the face of freedom for many people. Unlike Stalin’s violent wrath, Lenin embodied a hope which, perhaps, is still sought-after to this day. Images of Lenin still remain throughout Russia and other Eastern European countries, and his revolutionary prowess even crossed the seas into countries such as Cuba. It could be argued that he has transcended the role of mere politician to a sort of religious icon. 100 years after the October Revolution, you can still visit his resting body, preserved in a massive mausoleum in Moscow – in a way, for the Russian people, he is ‘always alive.’ In a way, the Revolution is ongoing. 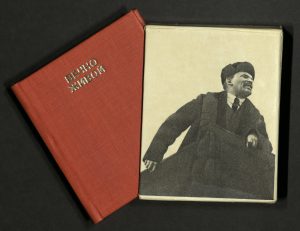 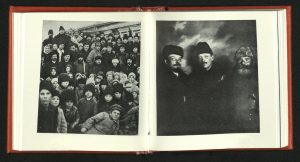 Inside the Rainbow : Russian children’s literature, 1920-35
Julian Rothenstein and Olga Budashevskaya
PG3190 I5 2013